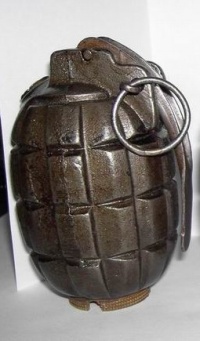 Mills Bomb is the nickname for a series of British grenades developed during WWI by William Mills. There are several models of the Mills Bomb, each with an official British number designation:

The specific model and mark of a Mills Bomb are marked on the base plug, but as all base plugs are interchangeable, identification may become muddy.

The Mills Bomb and variants can be seen in the following films, television series, video games, and anime used by the following actors: