Anthony Hopkins holds a Glock 21 as Ted Crawford in Fracture (2007). 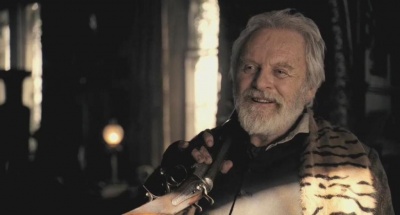 Anthony Hopkins with a Holland & Holland Paradox as Sir John Talbot in The Wolfman (2010).

Anthony Hopkins is a Welsh actor who is well known to film audiences for his role as Dr. Hannibal Lecter in the 1991 film The Silence of the Lambs, a role for which he received his first Academy Award for Best Actor. He would later reprise the role in the 2001 sequel Hannibal and the 2002 prequel Red Dragon. Among his numerous and diverse film credits include roles in such features as Legends of the Fall, A Bridge Too Far. Transformers: The Last Knight, Fracture, and The Wolfman as well as his MCU role as Odin in the Thor film trilogy. In 2016, he would take on the role of Dr. Robert Ford in the HBO series Westworld. In 2021, Hopkins received his second Academy Award for Best Actor for his role in the 2020 film The Father, making him the oldest person (at 83) ever to receive the award in an acting category.