The Beretta Model 38, also known as Moschetto Automatico Beretta 38 (literally "automatic rifle Beretta"), or MAB 38 for short, was designed by Tullio Marengoni in 1935-1937, and can trace it linage back to the Villar Perosa Machine Gun, through the previous Beretta M1918 and M1918/30 models. Introduced in 1938, the Model 38 was originally used by the Italian police. The Beretta Model 38A was introduced in 1941 as the official submachine gun of the Italian Army. The changes was that the shape of the holes in the cooling jacket and the compensator was changed, the folding bayonet of the Carcano M91/38 Cavalry Carbine ​type was also removed. It is a very robust weapon weighing in at 9 pounds, 13 oz., fully machined forged, and finely finished. The Model 38 was well-liked by both Italian and German forces during World War II; captured examples also proved to be popular among Allied forces. A combination of hefty weight, a long barrel, and low rate of fire also makes the Model 38 extremely controllable in fully-automatic fire. An unusual feature is the presence of two triggers. The Model 38 lacks a fire selector, with the rear trigger for fully-automatic fire and the front trigger for single shots.

The Model 38A was manufactured from 1941 to 1944, with the simplified Beretta Model 38/42 introduced in 1942. The Model 38/42 was made from stampings and a rolled steel receiver to increase war time production. The Model 38/42 was produced from 1942 to 1944. The Beretta Model 38/44 was introduced in 1944 by the German-controlled production line to German troops as a substitute standard. That model was in production from 1944 to 1949 and was issued to the Italian Army and Police after the war between 1945 and 1962, and to the force protection units of the Italian Air Force until the early '90s. Nowadays, the Italian Navy is the only user of the SMG. It is used in training, kept on board minor vessels as a "force protection and anti-mutiny weapon", and for ceremonial purposes, used only by the common sailors.

Beretta Model 1 - 9x19mm Parabellum. An experimental version of the MAB 38A, developed in 1941. It did not go into production, but a number of elements were used in the subsequent MAB 38/42.

This version includes a crossbolt-type safety. Once the magazine is inserted, the safety is activated by pressing the crossbar from left to right. According to some sources, it was also later offered as the "Model 4"; this may cause some confusion as the original Beretta Model 4 was an experimental SMG, which had a folding stock and an attachable bayonet.

In 1957, it was replaced by the MAB 38/57, characterized by a new safety, located in the finger groove on the right side of the stock. This safety must be pushed inwards when grasping the stock for the weapon to fire. The MAB 38/57 was the last version, produced until 1961. 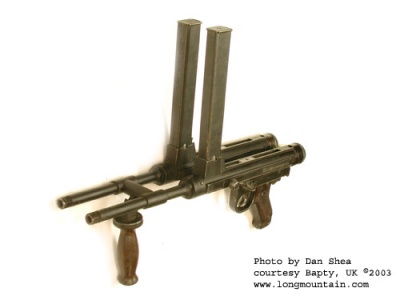 Movie armorers often use Beretta Model 38 variants to mock-up the Villar Perosa M1915 SMG. The most known example is a hand-held variant made by movie armorer Bapty & Co. which was used in several productions.