The M67 was developed at the same time as the M61 (which is an improved version of the M26 hand grenade). Though developed during the late 1950s, it was not fielded until the late 1960s. Most of the grenades used in Vietnam were of the M26A1 / M61 variety prior to 1968. After 1969 the M67 was the foremost issued grenade in the field. The M67 has a wire "jungle clip" safety device and the M33 is the same model without the "jungle clip".

The M68 hand grenade is identical to the M67 in appearance, the only difference between the two is the fuse. The M68 is a impact fragmentation hand grenade with a time delay backup. If the impact should fail the timer will detonate after 3-7 seconds depending on the temperature.

The practice version , the M69 Training Grenade (the inert blue painted pot metal dummy), is the version MOST likely to appear in films, since movies and television shows have no need for live ordnance. The practice version, 99% of the time is painted Olive Drab Green (which is wrong, since the real M67 and M68 have a more brownish Olive Drab color).

The M67 hand grenade and variants can be seen in the following films, television series, video games, and anime used by the following actors: 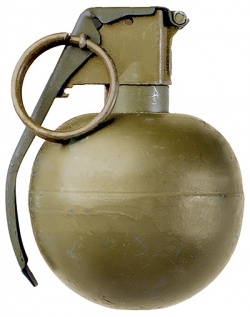 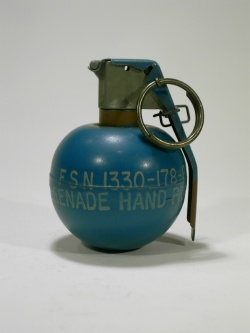 M69 training grenade - the blue paint indicates it uses as a training weapon.