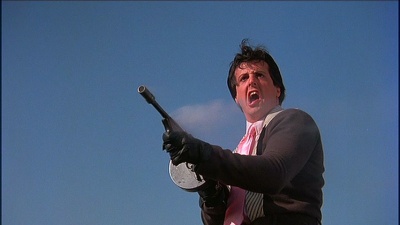 Sylvester Stallone aims a SIG-Sauer P229 as Barney Ross in The Expendables 2 (2012).

Sylvester Stallone is the American actor/director best known for his portrayal of such iconic characters as Rocky Balboa in six Rocky feature films and 2 Creed feature films in addition to his roles as John Rambo in five feature films and as Barney Ross in three Expendables films. Over the past four decades, his action movie resume includes such films as Tango & Cash, Demolition Man and Cobra (1986) in addition to such dramatic films as Victory and Cop Land. He also has directed several features, notably installments in the Rocky, Rambo and Expendables series.

See the discussion page for the films in the IMFDB directed by Sylvester Stallone.