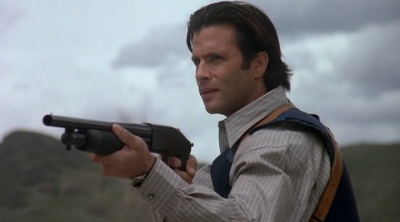 Lorenzo Lamas holds a Mossberg 500 Cruiser as Nick Travis in The Rage (1997).

Lorenzo Lamas is an American actor who is perhaps best known for his action hero roles in several B-movie series such as Snake Eater and CIA Code Name: Alexa. He also is the son of fellow actor Fernando Lamas.