Mel Gibson as Max Rockatansky with his legendary sawn off double barrel shotgun in The Road Warrior (1981). 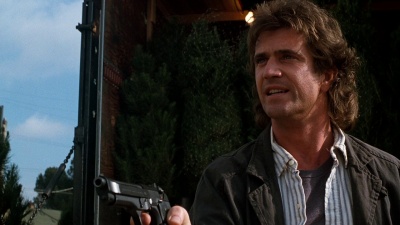 Mel Gibson charges with his bayonet-equipped XM16E1 Rifle as Lt. Colonel Hal Moore in We Were Soldiers (2002).

Mel Gibson wields a Glock 23 as Detective Thomas Craven in Edge of Darkness (2010).

Mel Gibson wields a Heckler & Koch G36C as Conrad Stonebanks in The Expendables 3 (2014).

Mel Gibson is an Australian actor/director well known to movie audiences for his roles as "Mad Max" Rockatansky in the original Mad Max film trilogy and as Detective Sergeant Martin Riggs in four Lethal Weapon films. In addition, he has appeared in such features as Tequila Sunrise, Bird on a Wire, Ransom (1996), and Maverick (1994). Gibson has directed several acclaimed feature films in more recent years including A Man Without a Face, Apocalypto, Hacksaw Ridge, The Passion of the Christ, and Braveheart, the latter film for which he received Academy Awards for Best Director and for Best Picture. He also is the father of actor Milo Gibson.

See the Discussion for the films in the IMFDB directed by Mel Gibson.