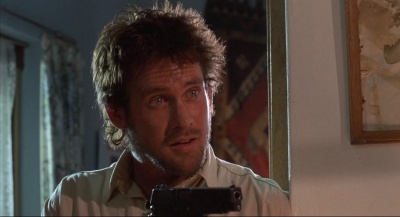 Michael Dudikoff holds a Varan PMX-90 as John Hamilton in River of Death (1989).

Michael Joseph Dudikoff II is an American actor of Russian origin. He began his cinema career in 1978 and appeared in more then 50 movies and TV series, the majority of them involving martial arts. His most notable role was as Joe Armstrong in the American Ninja series of films.