Jarhead is the 2005 feature film adaptation of the autobiographical book of the same name written by Anthony Swofford, a former US Marine Scout Sniper who chronicled his experiences of training and service in the Marines during the time of the first Gulf War. The film was directed by Sam Mendes and written by William Broyles, Jr., who himself was a former US Marine who served in Vietnam and co-created the ABC Vietnam War series China Beach. Jake Gyllenhaal stars in the film as Swofford and the cast includes Peter Sarsgaard, Jamie Foxx, Dennis Haysbert, and Chris Cooper. Several DTV sequels would follow: 2014's Jarhead 2: Field of Fire. 2016's Jarhead 3: The Siege and 2019's Jarhead: Law of Return.

The following weapons were used in the film Jarhead (2005):

Anthony "Swoff" Swofford (Jake Gyllenhaal) uses two Remington M40A1 sniper rifles in the film, first using one with a camo finish stock to train to be a Scout Sniper in Basic Training, the second a desert camo painted model with a foam rubber sniper cheek pad. Swofford never gets to fire his rifle in combat so to make up for this, he fires his rifle into the air at the end of the film to celebrate the war's end.

Unertl 10x view of Swofford's M40A1 rifle. Swoff's incredible ability to snipe is pretty clear in this scene when he puts a one-hole in the man target's head at 100yds.

Swoff firing his M40A1 on the range.

A shot of the back of the M40A1 as Swoff fires on the range.

Swoff in a ghillie suit armed with a desert camo M40A1 with a foam rubber sniper cheek pad. Note how he keeps tape covering most of his Unertl 10x scope front, which helps reduce scope flash at the cost of a more open view.

Swoff watches over the command post with his desert camo M40A1 and also uses the tape method. The fact that Swoff aims his rifle at several allies intentionally (finger on the trigger none the less!) is extremely unsafe and foolish. (this is from a deleted scene).

Swoff takes out and readies his M40A1 when scouting the town over-looking the enemy command center.

Swoff takes aim at an Iraqi officer in the command tower with his M40A1.

Swoff flicks the safety off on his M40A1 rifle.

Scope view of Swoff taking aim at the Iraqi officer.

Swoff squeezes the trigger on his M40A1.

Swoff fires his M40A1 into the air in celebration of the war's end.

The M16A2 appears numerous times in the film as the standard weapon of the U.S. Marine Corps, most notably in a scene where Swofford snaps under stress and holds Fergus (Brian Geraghty) at gunpoint with one and forces him to recite the Rifleman's Creed, then gives the weapon to Fergus and demands for him to shoot him with it, which Fergus refuses to do. During the Scout/Sniper training, The Marines are also seen using M16A2s converted to fire paintballs in a dismal attempt to take out their instructor, Staff Sergeant Sykes (Jamie Foxx) - one of the Marines taking a paintball to the face in the process. In one scene (during the desert party), Corporal Alan Troy (Peter Sarsgaard) fires his rifle on full-auto, a feat normally impossible with the M16A2, though most of Hollywood armories’ “M16A2s” are actually A2 upper receivers fitted to full-auto M16A1 lower receiver units.

A Marine during sniper training takes aim with a paintball converted M16A2, but foolishly leaves himself open long enough to receive a paintball between the eyes from SSgt. Sykes' M16A2.

"Back to the grunts, dick-face!" (Note the instructor with binoculars laughing in the background) SSgt. Sykes with his paintball M16A2 rifle after shooting the Marine between the eyes with it. Also note the green bolt carrier, identifying the weapon's conversion to non-lethal ammo

Swoff and Fergus time-test themselves on field stripping and assembling their M16A2s.

Swoff holds his M16A2 at Fergus, chambered and ready to fire.

Swoff points his M16A2 at Fergus.

Swoff with his M16A2 at the ready.

Pinko (Iván Fenyö) along with another Marine with their M16A2s at the ready.

Swoff being briefed with his M16A2 in hand.

When the Marines watch the infamous "Helicopter Scene" in Apocalypse Now, soldiers in the film are seen armed with M16A1 rifles with 30 round magazines.

A soldier sets the bullets in his 30 round magazine for his M16A1 in Apocalypse Now.

Mr. Clean (Laurence Fishburne) with an M16A1 yells "Run, Charlie!" in a scene from Apocalypse Now.

When Swofford is speaking his monologue at the end of the film, Master Sgt. Sykes (if you look closely on his plate carrier vest it shows an insignia with three stripes and three rockers) is seen serving in Iraq armed with a M4A1 carbine fitted with an ACOG scope and RIS foregrip. A soldier can be seen using one on Swofford's TV as well.

MSgt. Sykes armed with an M4A1. Sykes is also wearing the (now current) USMC Digital Desert MARPAT uniform, which was being fielded the same year that this movie was filmed - 2004 (released in 2005). Technically in 2004, most Marines were still wearing the Woodland MOD-II or Interceptor vests as the Coyote Brown ballistic vests were not widely available yet.

An M16A4 with an ACOG and vertical foregrip is seen on Swofford's TV.

A soldier is seen on Swofford's TV armed with an M16A4 with an ACOG and a foregrip.

When MSgt. Sykes is seen serving in Operation Iraqi Freedom, a Marine is seen running by with a Barrett M82A1 sniper rifle.

A Marine runs by Sykes with a Barrett M82A1 in hand.

When the Marines watch the infamous "helicopter scene" from Apocalypse Now, the Việt Cộng fighters on the screen are seen with Norinco Type 56 rifles.

A Việt Cộng soldier armed with a Norinco Type 56 in Apocalypse Now.

The FN M249 SAW makes a few appearances in the film, most notably when the Marines are having a party to celebrate the end of the war, wherein it is one of the weapons being fired into the air. Fergus is the most notable of users to use it during this scene.

Fergus fires an M249E2 SAW into the air.

A Marine fires an M249E2 SAW into the air (note the Minimi-style rear sights in this shot).

Fergus fires a SAW into the air.

The standard used version of the M60 machine gun at the time of Desert Storm, the M60E3, is seen several times in the film. Its first appearance is when the Marines are crawling through barbed wire in basic training, when a soldier is ordered to fire live rounds over their head. A trainee snaps and stands up and is killed by a shot to the head from the weapon. Aside from smaller appearances, the M60E3 is not seen much more until the end of the film, when several Marines are seen firing M60E3s into the air, including SSgt. Sykes.

A Marine fires live rounds from an M60E3 over the heads of the Marines as they crawl under barbed-wire.

A Marine erroneously armed with an M60E3 sits in the loader's hatch of an M1A1 Abrams tank (in reality a mocked-up Chieftain tank). It would be more properly portrayed if he was using an M240D machine gun. Note what appears to be the canvas cover at the base of the Chieftain's L11A5 120 mm rifled gun, visible underneath the fake Abrams gun mantlet.

An M60D is seen door mounted on a Huey helicopter while a Marine plays golf to pass time. When the Marines are watching the infamous "Helicopter Scene" from the film Apocalypse Now, a door mounted M60D machine gun also is seen in use.

An M60D is seen door mounted on a Huey helicopter as the pilot practices his golf swing.

An M60D machine gun is seen door-mounted in the Huey Helicopter when the Marines watch Apocalypse Now.

Browning M2HB heavy machine guns can be seen mounted on the Tank Commander's hatches of M1A1 Abrams tanks (in reality visually modified British-built Chieftain tanks). One is seen on a Humvee in the parade when the Marines return home, and again in news footage of Iraqi Freedom, this time fitted with a gun shield.

An Abrams tank commander mans a Browning M2HB on a visually modified Chieftain tank while the loader mans an M60E3.

A Marine mans an M2HB on a Humvee during the welcome home parade.

A soldier is seen firing an M2HB on Swofford's TV.

When the Marines watch the infamous "helicopter scene" from Apocalypse Now, one of the helicopters seen fitted with GE M134 Minigun, which a door gunner is seen firing. 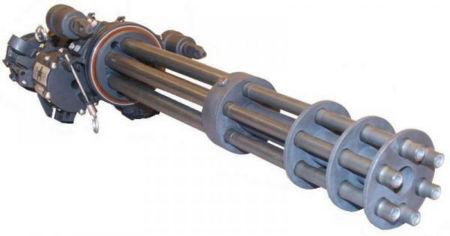 A door gunner in Apocalypse Now fires a GE M134 Minigun from the Huey helicopter.

The Beretta 92FS, standing in for the U.S. Military issued M9, appears several times in the film, seen mainly holstered in Officer's belts. This includes Lieutenant Colonel Kazinski (Chris Cooper) when he motivates the Marines when they first arrive, one is seen in SSgt. Sykes' holster, and Major Lincoln (Dennis Haysbert) keeps one in a shoulder holster. Among the weapons seen fired into the air at the end of the film, a 92FS is used by one of the Marines.

SSgt. Sykes with a 92FS in his holster.

Lt. Col. Kazinski with a 92FS in his holster.

Maj. Lincoln with a 92FS in his shoulder holster.

A Marine fires his 92FS into the air to celebrate the war's end.

The Cobray 37mm Launcher appears in the film mounted on several Marines' M16A2 rifles, most notably Fergus and Troy's rifles. These faux-launchers take the place of the actual M203, although some genuine M203s are seen, sometimes they even switch between the two in continuity errors.

Troy checks his M16A2 fitted with a CM203 Flare launcher taking the place of the M203 HE launcher. The most notable differences are the cocking bolt, the squared trigger guard, and the lack of a second fold-out trigger.

The M203 grenade launcher is seen mounted on Fergus and Troy's M16A2 rifles sometimes taking the place of the Cobray CM203 launchers used in other scenes.

Fergus performs a function check on his M16A2/M203 combo during a timed field strip/reassembly run with Swofford.

At one point during Desert Storm, the protagonists are patrolling in the desert when an Air Force A-10A Thunderbolt II happens upon them, strafing them with its' General Electric GAU-8/A Avenger cannon, destroying a Humvee and wounding several Marines. This incident is based on a similar friendly fire mishap where an A-10A mistakenly attacked a British Army unit during the first Gulf War.

An M18A1 Claymore mine makes a rather humorous appearance in the film when Fergus asks Swofford which way the mine should be planted facing, obviously having failed to notice the words "FRONT TOWARD ENEMY" on the front of the mine, which Swofford sarcastically points out.

Fergus tries to figure out the M18A1 mine.

Fergus reads the mine and figures it out.

During their time in the Saudi desert during Operation: Desert Shield, the Marines are shown practicing with M67 hand grenades. 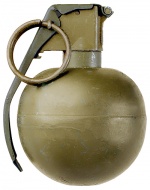 In the scene where the Marines are digging their sleeping holes at the border just before the start of Operation: Desert Storm, an M136 AT4 can briefly be seen among some of the Marines' gear.

An AT4 attached to a Marine's pack.

At the start of Operation: Desert Storm, a Humvee can be seen with a Mk. 19 grenade launcher mounted on the roof.