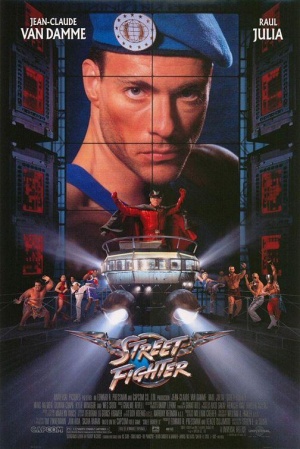 Street Fighter is the 1994 feature film adaptation of the popular Capcom fighting video game. The film's plot involves the international fighting force of the Allied Nations led by Colonel Guile (Jean-Claude Van Damme) as they plan to rescue aid workers who have been taken hostage by the evil General M. Bison (Raul Julia in his final role). The film's cast also includes Ming-Na Wen, Kylie Minogue, and Wes Studi. An unrelated adaptation, Street Fighter: The Legend of Chun-Li, was released in 2009.

The following weapons were used in the film Street Fighter:

A Beretta 92FS Inox is used by Colonel Guile (Jean-Claude Van Damme) as his standard sidearm and also when he is about to put his now genetically-mutated friend Carlos Blanka out of his misery until Dr. Dhalsim stops him.

Beretta 92FS Inox - 9x19mm. This pistol was the screen used gun in the film Fair Game.

Colonel Guile (Jean-Claude Van Damme) draws his Beretta 92FS Inox upon hearing gunfire outside as the prison truck is being hijacked.

Guile looks out the window at the attack below, with his Inox at the ready.

Guile opens fire with the Beretta.

Cammy (Kylie Minogue) carries a Beretta 92FS fitted with wood grips. She is seen using it during the assault on Bison's fortress. One of Sagat's henchmen aims a Beretta 92FS at Bison's troops at the arms market standoff. 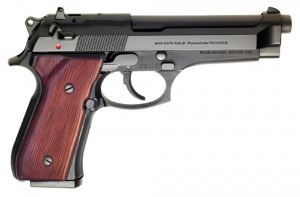 Cammy draws her 92FS when an assassination attempt is made against Guile.

Cammy (Kylie Minogue) uses her Beretta 92FS during the assault on Bison's fortress.

One of Sagat's henchmen (left side of the screen, standing behind Ken) aims a Beretta 92FS at Bison's troops at the arms market standoff.

T. Hawk (Gregg Rainwater) carries a Heckler & Koch VP70 as his sidearm. The handgun is taken by Ken (Damian Chapa) to shoot at Col. Guile during the prison break. T. Hawk later uses it during the assault on Bison's fortress. A VP70 is held on Ken during the arms market standoff as Sagat demands to know whose side he is on. 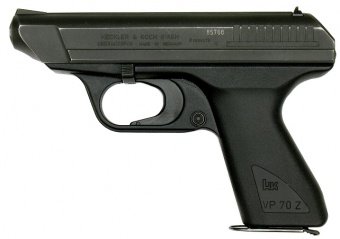 T. Hawk (Gregg Rainwater) armed with his VP70 in the morgue.

Ken (Damian Chapa) uses the VP70 during the prison break.

A VP70 is held on Ken during the arms market standoff as Sagat demands to know whose side he is on.

T. Hawk fires his VP70 during the assault on M. Bison's fortress.

A SIG-Sauer P228 is held by an officer of the Allied Nations (AN) on the Shadowlaw assassin after he attempts to assassinate Colonel Guile (Jean-Claude Van Damme). 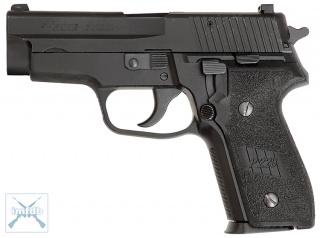 An AN soldier holds his P228 on the Shadowlaw assassin after his failed assassination attempt of Colonel Guile (Jean-Claude Van Damme).

A Smith & Wesson Model 4505 is held by one of Sagat's men, standing to the left of the screen, during the arms market stand off, but is shown for a brief moment and was blurry, making exact identification difficult. An Allied Nations MP also uses one. 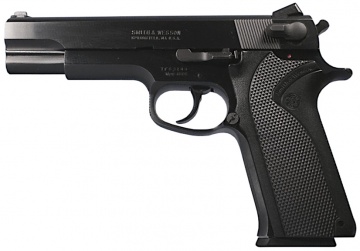 Smith & Wesson 4505 - .45 ACP. The version in the movie is the early version with the squared 'finger step' trigger guard, 'step up' in the frame, early type fixed sights, and curved backstrap.

A blurry shot of an Smith & Wesson 4505 in the hands of one of Sagat's men standing on the left side of the screen, holding the pistol with the muzzle pointing in the air.

The Allied Nations MP on the left is seen armed with his Smith & Wesson 4505. While the MP on the right has a standard Beretta 92FS.

The Heckler & Koch MP5A3 fitted with the original slim handguard is first seen being inspected by General Bison at the arms bazaar. It's then used by Guile during the assault on Bison's control room. The MP5A3 is also carried by Capt. Sawada and one is also examined by Bison at the arms market.

General Bison examines an MP5 at the arms market.

Guile readies the MP5A3 he took from a dead Bison soldier during the assault on Bison's fortress.

Capt. Sawada is seen armed with an MP5A3.

Capt. Sawada readies his MP5A3 as he signals to the rest of the squad.

An IMI Micro Uzi is seen in the possession of Sagat and his men at the arms market.

One of Sagat's henchmen hands him a Micro Uzi as Bison finishes with the MP5.

One of Sagat's men in the background behind Vega with a Micro Uzi as they instigate a standoff with Bison and his troops.

The M16A1 is the standard rifle carried by the AN (Allied Nations) troops. An obviously fake one is seen wielded by an Allied Nations trooper on a speedboat. Both 20 and 30-round magazines are shown.

An AN soldier stands guard over a medical center with her M16A1 as refugees are admitted.

Other AN soldiers are seen with their M16A1 rifles.

An obviously fake one is seen wielded by an Allied Nations trooper on a speedboat.

Modified Norinco Type 56s are the standard rifle of the Bison Soldiers. They have a few visual modifications, such as a custom black plastic stock and handguard and a laser sight on the top of the handguard.

Bison troops aim their custom Type 56 rifles at Sagat and his men during the arms market standoff.

An FN FAL "G Series" is seen in the hands of AN soldiers during the assault on Bison's fortress.

The AN soldier seen with his FN FAL.

M60 machine guns are seen mounted on AN jeeps and Speedboats.

An M60-armed jeep is run off the road by the escaping prison truck.

Another M60 machine gun is seen on a boat when the AN soldiers assault Bison's fortress.

The Browning M2HB is seen on the AN Patrol Boats dual mounted.

The Browning M2's as seen in their dual-mounted configuration on several of the assault boats.

An RPK light machine gun is briefly seen in the arms bazaar attended by M. Bison and Sagat.

Zangief handles an RPK at the arms bazaar.

The RPD is briefly seen used by Bison's forces as they defend the fortress against the AN troops.

Bison's troops open fire on the AN troops with their RPD's

Two of Sagat's men held Ken and Ryu at gunpoint in the cage fight arena with pistol-gripped Remington 870s with long barrels and standard 4-shot magazine-tubes.

Ken and Ryu get caught at the cage fight arena by two of Sagat's henchmen, who hold them at gunpoint with pistol-gripped, long barreled, Remington 870s.

Vega is seen inspecting an M16A1 with an M203 grenade launcher mounted underneath.

Vega examines an M16A1 with underbarrel M203 grenade launcher at the arms market before passing it to Sagat, who then passes it to Bison.

A modified, early production M72 LAW is used by Cammy to blow an opening in Bison's fortress.

Cammy holds the M72. Note the internal tube for the pyro charge. Note the front sight is missing; because these use radioluminescent paint containing promethium-147, they are supposed to be snapped off the launcher and turned in to a radiation safety officer for disposal after a LAW has been fired. This spent tube lacks any replacement.

The aftermath of the explosion. Note the rear part of the M72's tube is upside-down.

A ten-barrel Gatling gun is used as part of General Bison's perimeter defense. Oddly, the bottom barrels fire rather than the top. Colonel Guile's stealth boat is also armed with an eight-barreled Gatling gun.

A ten-barrel Gatling gun is used as part of General Bison's perimeter defense.

Oddly, the bottom barrels fire rather than the top.

Used by Sagat's men to rip Ken and Ryu.

The odd-looking "Tennis Ball Launcher" seen in a crate alongside another fake M16.

A BGM-109G GLCM is seen 'for sale' in an arms market. The BGM-109G was a nuclear-capable version withdrawn from service in 1991 to comply with the Intermediate-Range Nuclear Forces Treaty between the United States and the Soviet Union.

The BGM-109G as seen in the arms bazaar... I wonder if the seller will accept a credit card?

Seen on the armored vehicle driven through the wall of the cage fighting arena by Guile.

The fictional missiles as seen in the fighting area.
Retrieved from "https://www.imfdb.org/index.php?title=Street_Fighter&oldid=1502970"
Categories: