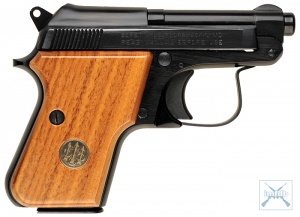 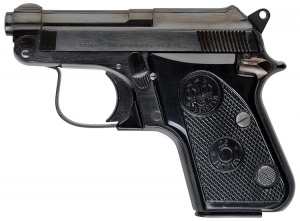 The Beretta 950 Series of pistols was the Italian gun maker's entry into the ultra compact, small caliber pocket pistol for the latter half of the 20th century. The original Italian Beretta 950B was a .25 ACP handgun, imported into the United States from 1952 until the passage of the "Gun Control Act of 1968". Beretta had to modify the design to comply with import restrictions, and the new "American" model had an additional 'thumb safety' and was imported after 1968 as the Model 950BS ("S" for Safety, however one cannot escape the irony of naming a model redesigned to comply with a gun control law as the "BS" model). Any Beretta marked 950B was imported into the U.S. before 1968. Beretta also marketed a sister gun to the tiny 950 B/BS "Jetfire", called the Model 950B or 950BS "Minx", which had a longer barrel and was chambered for .22 Short only.