Operation Crossbow (alternate title: The Great Spy Mission) is a 1965 war/spy film with George Peppard, Sophia Loren, Trevor Howard and John Mills leading an all-star cast. Directed by Michael Anderson (The Dam Busters, Around the World in Eighty Days,) it is a heavily fictionalized account of the real Operation Crossbow, which was the Anglo-American effort to neutralize German V-weapons during World War II.

Although top-billed, Sophia Loren actually had a small role. She was brought in to bring in viewers, and casting her was not difficult as she was married to the producer, Carlo Ponti. She did not succeed, however, as the film did poorly in its initial release. Blaming the title for perhaps suggesting that the film was about actual bows and crossbows, it was re-released under the more obvious title, The Great Spy Mission.

The following weapons were used in the film Operation Crossbow:

German officers are armed with Walther P38s. Bamford (Anthony Quayle) appropriates one from one of them.

As good of a shot as they come.

German troops are armed with MP40 submachine guns. Lieutenant John Curtis/Erik van Ostamgen (George Peppard) makes extensive use of one in the ending.

This MP40 actually appears to be missing a piece.

Despite being a fighter pilot and an engineer, Curtis does what so few do in WWII movies: firing the MP40 using the extended shoulder stock.

A mockup MP40 is used by one of the German guards at the factory. It's possible it is a SMG modified to look like a MP40.

The magazine holder looks loose and the bottom housing looks very different than a genuine MP40.

A Bofors 40mm is seen in the background in one scene. Almost all the AAA scenes in the film used existing wartime stock footage, so an actual gun (or mockup) was rare. 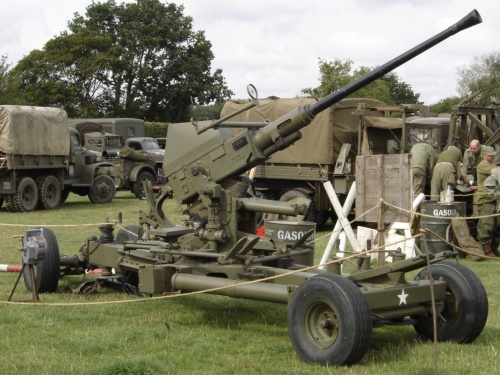 The Bofors 40mm can be seen in the background. 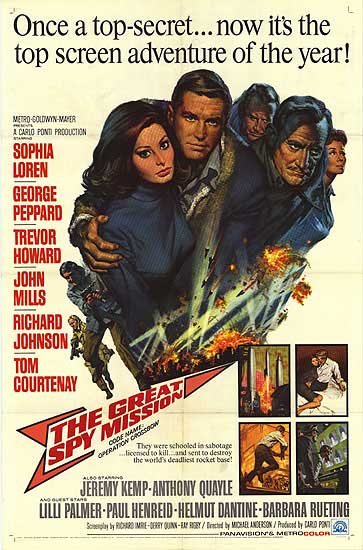