The following weapons were used in the film Thunderball:

Both James Bond (Sean Connery) and Count Lippe (Guy Doleman) carry the Walther PPK with and without a suppressor. Vargas (Philip Locke) can briefly be seen with one as he silently approaches Bond and Domino. Bond's dropped PPK has the "bull-dog" nose of a pre-WWII pistol rather than the sleeker lines of the post-war PPKs.

Lippe holds a PPK to Angelo Palazzi (Paul Stassino) (right) when he asks for more money.

Bond searches his room with his PPK.

Bond ducks with his PPK.

Bond drops his PPK, which fires (despite not cycling or ejecting a spent cartridge).

Bond's PPK lays on the ground.

Largo's hitman Vargas puts a suppressor on his PPK as he approaches Bond.

When Count Lippe (Guy Doleman) prepares to face Bond at Shrublands, he affixes a suppressor to a compact Beretta M1934. Quist (Bill Cummings), one of Largo's thugs, gets his Beretta M1934 knocked out of his hands, which Leiter unloads.

Count Lippe puts a suppressor on his Beretta M1934

Count Lippe (Guy Doleman) fires a Colt Detective Special at Bond while chasing him on the road from Shrublands. The Disco Valante Captain (Harold Sanderson) draws one on Bond during the finale, which Largo (Adolfo Celi) later picks up and holds briefly.

The captain aims his Colt Detective Special at Bond

Fiona Volpe (Luciana Paluzzi) pulls a .25 caliber Beretta 950 Jetfire on James Bond when he tells her that he knows she works for SPECTRE. 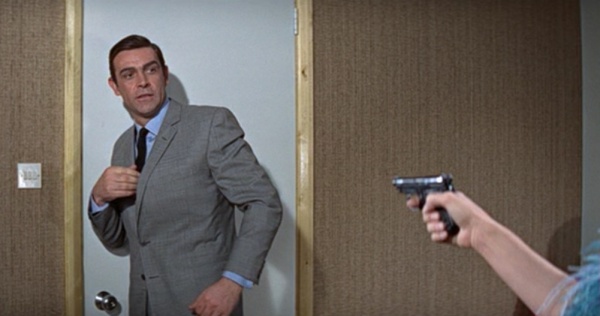 Fiona aims her Jetfire at Bond

One of Largo's thugs carries a Smith & Wesson Model 36. It is the thug with the Model 36 that shoots Bond in the leg during the chase.

A thug in the car points his Model 36 at Bond

I saved this shot and lightened it up a bit and that smith actually seems to have the "hammerless" shape of the Centennial, which was showing up in Tv shows like The Avengers . It might be worthwhile for someone more technically capable than an old dinosaur like me to play around with it to see if it is a Centennial.--Tecolote (talk) 03:23, 3 September 2014 (EDT)

One of Largo's thugs fires a Colt New Service at Bond during the dance, but accidentally shoots Fiona. The guards at Largo's estate are also armed with these revolvers. With the straight barrel and longish ejector rod knob, tha'ts likely a WW1 vintage .455.--Tecolote (talk) 03:23, 3 September 2014 (EDT) 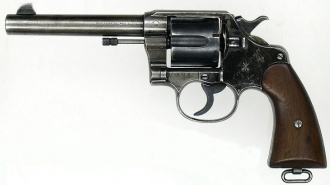 One of Largo's men holds his revolver.

A thug aims his New Service through the curtains

The butler and a bodyguard storm into the drawing room

Felix Leiter (Rik Van Nutter) fires a rifle with a scope at a shark to distract the other sharks as Bond dives. The barrel and front sight appears to be that of an M1 Carbine, and may be a Plainfield or Iver Johnson clone with a pistol grip added to the stock.

Both Largo (Adolfo Celi) and Fiona (Luciana Paluzzi) fire sporting Remington Model 58s with raised ribbed when target shooting. Bond claims to Largo that the shotgun would look better in the hands of a woman.

"That looks like a woman's gun."
"You know much about guns, Mr. Bond?"
"No. I know a little bit about women."
Largo hands Bond the shotgun.

Largo introduces Vargas by pointing his shotgun at him

Bond fires a Browning Auto-5 when shooting with Largo.

After successfully hitting a clay pigeon from the hip, Bond remarks to Largo that firing accurately isn't difficult. One note to point out, When Sean shoots the clay pigeon out of the sky, he motions the force of the Auto-5's recoil (Not acted out), hinting that a live round was fired instead of blanks, as Bond is shooting at a clay pigeon. 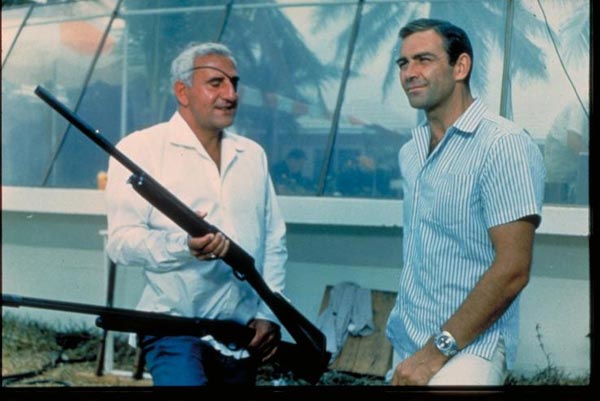 Largo and Bond with the shotguns in a production still

The SPECTRE guards at Largo's residence and on the Disco Volante use MP40 submachine guns.

A guard at the main gate carries an MP40.

One of Largo's men on the Disco Volante holds an MP40.

One of Largo's men arrives at the pool with his MP40.

Largo's men left of the window carries a Sterling.

A Coast Guard speedboat battling the Disco Volante has a .30-06 caliber Browning M1919A4 machine gun mounted on the bow.

A Coast Guarder fires at the Disco Volante.

The Disco Volante's "cocoon" section also has a Lahti L-39 20mm anti-tank rifle mounted, which is operated by a henchman (Arthur Howell).

Largo's men fire a Lahti L-39 at the Coast Guard. The L-39 is a semi-automatic weapon but the movie portrays it as fully automatic with virtually no recoil. Most likely the gun was never fired on-screen but rigged to fire flame only.

Almost all underwater scenes (and a few above water) extensively feature spear guns used in battle.

"I think he got the point," Bond tells Domino after using the Technisub Jaguar spear gun.

One of Largo's men underwater with a spear gun.

Sean Connery uses the Walther in the gunbarrel sequence.