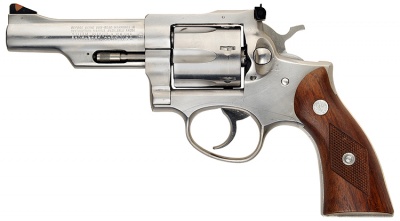 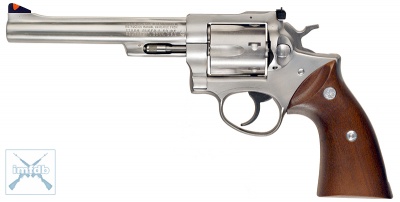 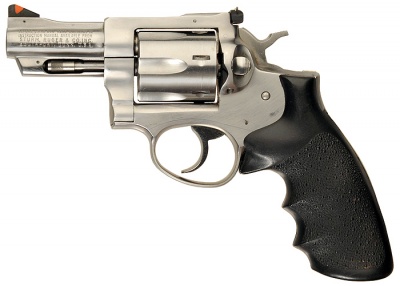 The Ruger Security Six, Service Six and Speed Six revolvers were the company's flagship double action revolver line. Introduced in 1969 at the NRA annual convention and released for commercial sales (after several engineering "tweaks") in 1971. Production ended in 1987 to make way for Ruger's newer line of handguns, the SP101, the GP100 and the Redhawk.

The Ruger Security Six and variants can be seen in the following films, television series, video games, and anime used by the following actors:

The Ruger Security Six was a .357 Magnum /.38 Special revolver introduced in 1968, designed as Ruger's flagship offering for the double action revolver market. The Security Six was fitted with adjustable rear sights and was offered in .357 Magnum, with some early production guns chambered for .38 Special only. The first Security Six Revolvers were offered in Cobalt Blued finish. Starting in 1975, Ruger offered the Security Six in a stainless steel version. Ruger hoped to gain police and armed security contracts, using sophisticated investment casting techniques in their construction, which allowed them to be competitively priced when compared to similar Colt or Smith & Wesson models. Due to their price and strength, the design was a great success. Production ceased in 1987, when they were replaced by the GP-100, which was an improved and stronger version of the Security Six. Ruger also produced special orders of the Security Six in 38/200 (38 S&W) for overseas customers in India and Europe. There is also word that 25,000 Police-Sixes were manufactured for the Indian government in 380 auto. 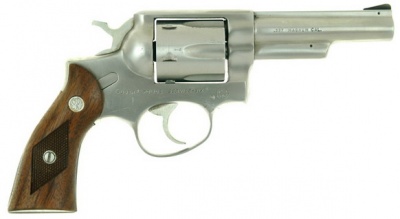 In 1972 the "Economy Version" of the Security Six was introduced - the 'Service Six'. The revolver was also called the "Police Service Six" and had simple fixed sights (which knocked the price down considerably). This less expensive version was designed to appeal to the Police Duty revolver market (with limited budgets). The Service Six was offered in .357 Magnum, .38 Special, and 9x19mm. The Service Six had a very clever cylinder ring that allowed loading of the rimless 9mm rounds without full or half moon clips. Some of the police models were dedicated .38 special only (as some departments had not approved of the .357 magnum for duty carry). The Service Six in .38 Special was also issued by the U.S. Military (all branches) to it's security personnel (military police and civilian guards) and pilots from the late Seventies to the early nineties. It and the Smith & Wesson Model 15 were often found side by side in unit and base armories. The military model designation was GS32-N. The barrel lengths offered were 2.75", and 4" inches. Production ended in 1987. 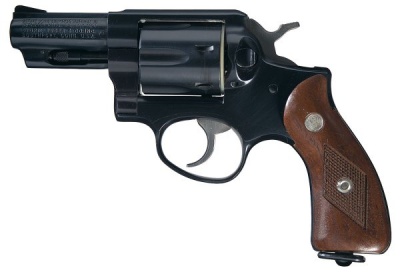 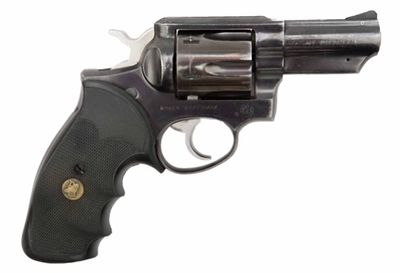 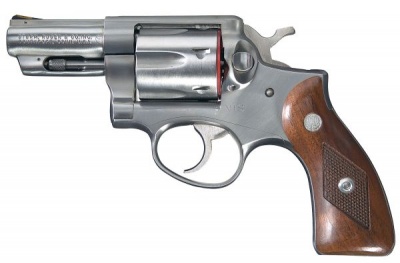 Around the same time as the Service Six, Ruger introduced the Speed Six, which was simply the Service Six frame with a shorter round butt. The shorter barreled versions were supposed to serve as backup guns and round butt revolvers were well regarded when worn in a discrete shoulder rig or back holster. The Speed Six could be had with a shaved hammer for ease of concealment. The Speed Six was offered in .357 Magnum, .38 Special, 9x19mm and .38 S&W for export to the U.K. and India. The barrel lengths offered were 2.75", and 4" inches. Production ended in 1987.