From Internet Movie Firearms Database - Guns in Movies, TV and Video Games
(Redirected from License To Kill)
Jump to navigation Jump to search

Licence to Kill is the 16th entry in the official James Bond film series. The 1989 sequel (which was the first not to bear the title of an Ian Fleming novel or short story) finds Bond on a personal mission to take down the drug lord responsible for an attack on his CIA friend Felix Leiter and his wife. Licence to Kill co-stars Carey Lowell, Robert Davi, Benicio del Toro, Talisa Soto, and Wayne Newton and was the final Bond film directed by John Glen and the final film to star Timothy Dalton as Agent 007.

The following weapons were used in the film Licence to Kill:

James Bond (Timothy Dalton) carries his usual Walther PPK as his weapon of choice throughout the film. However, this particular PPK is a WWII-era German Waffenamt variant (it should be noted that the PPK used in Licence To Kill was sourced from Stembridge Gun Rentals instead of Bapty and Co. since the movie was filmed entirely in the US and Mexico). This is most likely the same PPK Dalton had carried in the previous film, The Living Daylights. 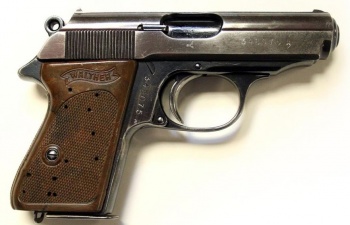 Bond searches Felix and Della's home with his PPK drawn.

James Bond (Timothy Dalton) with his usual Walther PPK after he opens the door.

Bond sets his PPK down next to Della.

Bond prepares to give his PPK to M at the Hemingway House, glibly remarking that it is a "farewell to arms".

Bond shows Pam his PPK in a shoulder holster.

A good view of the grip as Sanchez (Robert Davi) asks Bond why he carries a PPK.

During the tour of Sanchez' drug lab, Dario (Benicio del Toro) pulls a Walther P5 on Bond. A P5 was used by Bond in Octopussy.

Closeup of the P5 Dario sticks into Bond's back.

The rest of the demonstration continues without the others knowing about Dario confronting Bond.

During the pre-credits sequence, Felix Leiter (David Hedison) hands James Bond (Timothy Dalton) a Taurus PT92 "just in case". Bond uses it during the shootout against the henchmen that open fire, using it moments later to shoot the Jeep's left front tire. Milton Krest (Anthony Zerbe) uses a PT92 after Bond uses a spear gun to impale a diver and jumps off. The film's armorer states clearly its a Taurus PT92 and not a Beretta 92FS.

During the pre-credits sequence, Bond prepares to chamber the Taurus PT92 that Felix hands him.

Bond fires his PT92 at Sanchez's men from the Coast Guard helicopter.

Bond aims the PT92 at the jeep.

Braun (Guy De Saint Cyr) is armed with a Heckler & Koch P9S. He is later seen carrying it on the Wave Krest.

Braun (left) armed with a P9S searches the Wave Krest for Sanchez's money.

Pam (Carey Lowell) carries a stainless steel Beretta 950 Jetfire as her sidearm throughout the film, giving one to Bond, and grabbing a spare one out of her purse when Bond leaves to check the hotel room. She also notably uses her Jetfire when she meets Professor Joe Butcher (Wayne Newton) when she goes to "study" with him.

Bond chambers a round into the Beretta Pam gives him from her leg holster.

Bond aims his Beretta at Q before realizing his identity.

Bond spins around with the Beretta when Pam enters the hotel room with her own Jetfire drawn.

Bond intimidates Pam with her own Beretta Jetfire.

Pam demands the keys from Butcher.

Col. Heller (Don Stroud) carries a Browning Hi-Power throughout the film. Another appears to be used by one of Sanchez's men.

Heller uses the HP to fire at the Chinese agent Loti.

Heller walks through with his Hi-Power drawn.

Browning on the right.

On the far left, what appears to be another Browning Hi-Power is held by one of Sanchez's men. 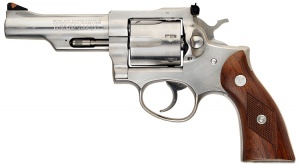 Bill, one of the security guards at Milton Krest's warehouse, carries a Smith & Wesson Model 19 revolver.

A guard puts his revolver to Bond's head.

Bond is threatened by the guard.

Bond reaches for the guard's revolver before it gets shot away.

Kwang (Cary-Hiroyuki Tagawa) appears to pull a Smith & Wesson Model 19 Snubnose when Heller and the military close in.

Sanchez shoots at Kwang out of anger.

The agent draws his revolver as M prevents him from shooting.

When Bond hijacks the seaplane full of money, one of the pilots pulls a Smith & Wesson Model 15 on Bond and attempts to shoot him with it (instead shooting a package of money), but Bond knocks it out of the pilot's hand. Seen in the holsters of Florida Keys police officers.

The pilot shoots a package aboard his plane when trying to shoot Bond.

Dario (Benicio del Toro) grabs a Smith & Wesson Model 66 from one of his henchmen in the bar and uses it to fire at Bond and Pam as they get away on the boat. These appear to be the revolvers carried by Key West police officers as well.

Dario aims his revolver at Bond. Note the massive hole blown in the wall by Pam's Mossberg 500 Cruiser.

Many of Sanchez's henchmen are armed with H&K HK94A3s chopped and converted to resemble MP5A3 submachine guns. Dario (Benicio del Toro) carries one while in the jeep in the pre-credits sequence. The guard (Carl Ciarfalio) at Milton Krest's warehouse carries one, as do several of Sanchez's men during the final car chase. The majority of the film was produced in both the US and Mexico and the production crew sourced their weapons from Stembridge Gun Rentals instead of Bapty and Co (the traditional armorers for the James Bond movies).

Dario jumps out of the Jeep, carrying his HK94A3.

The warehouse guard (Carl Ciarfalio) loads a fresh magazine into his HK94A3.

The warehouse guard searches for Bond.

A Sanchez guard stands with his HK94A3 slung.

One of Krest's men looks for Bond with his HK94A3.

One of Sanchez's men watches Bond and Lupe go off in Sanchez's boat.

Sanchez's men with their converted HK's.

Perez (Alejandro Bracho) and Sanchez (Robert Davi) himself use Micro Uzis. Interestingly, if you listen carefully when Sanchez fires his Micro Uzi at Bond at the start of the truck chase, the bullet impacts against the tanker plink out the opening notes of the James Bond theme. Sanchez also uses his micro Uzi to "cut overhead" after Truman-Lodge (Anthony Starke) sarcastically congratulated him on an "eighty-million dollar write-off".

Perez fires a Micro Uzi over the Jeep's windshield.

Perez, holding a Micro Uzi, finds his hidden money aboard the Wave Krest. The UZI appears to hang from a Galco shoulder rig.

Sanchez takes a Micro Uzi from the case containing the Stinger.

Sanchez (Robert Davi) fires his Micro Uzi from the car.

"Then I guess it's time to start cutting overhead." Sanchez (Robert Davi) fires his Micro Uzi after Truman-Lodge (Anthony Starke) sarcastically congratulated him on an "eighty-million dollar write-off".

Sanchez realizes his Micro Uzi is empty during the tanker chase.

Felix and Mullens (Rafer Johnson) run from the helicopter with Commandos.

M16A1 rifles are held by DEA agents and SWAT officers that escort the prison van carrying Sanchez. The soldiers in the fictional country of Isthmus also carry M16A1 rifles. These rifles are fitted with M16A2 handguards. What appears to be a scoped M16 is used by an MI6 agent when Bond escapes from custody at the Hemingway House.

Three soldiers walk through Isthmus City with M16s. The guard standing closest to the red door on the left is carrying a Remington 870.

The Chinese agent Loti (Diana Lee Hsu) fires an M16A1 taken off one of the Isthmus soldiers.

An Isthmus soldier walks through the bombed out Chinese HQ with his M16. The filled in barrel makes this a prop rifle.

What appears to be a scoped M16 is used by an MI6 agent when Bond escapes from custody at the Hemingway House.

An IMI Galil is seen in the hands of an Isthmus soldier.

The rifle is seen in the hands of an Isthmus soldier.

Ed Killifer (Everett McGill), the DEA agent that Sanchez bribed to get him out of custody, carries a Remington 870 shotgun in the prison van, using it to knock the driver out and take control of the van and run it off a bridge. They were also seen carried by Bank of Isthmus City security guards during the scene that introduces Truman Lodge.

Killifer knocks out the van driver.

CIA agent Pam Bouvier (Carey Lowell) uses a sawed-off Mossberg 500 Cruiser during the bar fight. It blows a hole in the wall somehow big enough for a human to fit through.

Pam orders Bond around while brandishing her Mossberg Cruiser.

A Browning M1919A4 is seen mounted on an M5 Stuart tank ordered to open fire on a hideout.

On the left, a Browning M1919A4 is seen mounted on an Stuart tank ordered to open fire on a hideout.

What are referred to as "Stingers" in the film are actually older FIM-43 Redeye launchers. During the final car chase, Perez (Alejandro Bracho), one of Sanchez's henchmen, attempts to use the Redeye to try and kill Bond, but Bond dodges the missile by tilting his tanker on its left side wheels. Sanchez later attempts to use one to take down Pam's plane. The "Stinger" is incorrectly portrayed as using a reloadable launch tube: Stinger's launch tubes are single-use.

Dario packs up the Redeye.

One of Sanchez's men pulls out the Redeye.

Perez aims the Redeye at Bond's tanker. Notice the man standing behind him in the grey shirt - not a good idea.

Perez flips the safety catch off.

Firing the launcher. The actual Stinger system has a large backblast, which would have likely badly injured anyone standing that close behind it.

The henchmen watch as Bond tilts his tanker on two wheels.

Sanchez later attempts to use one to take down Pam's plane.

A spear gun is used by Bond and Krest's men during the plane chase in the Florida Keys.

Bond uses a spear gun to waterski behind a drug plane.

Q makes Bond a customized Camera Gun to assassinate Sanchez, which can only be fired by him thanks to the fingerprint recognition mechanism built into the pistol grip (explaining why the Chinese Intelligence agents cannot get it to work). Q identified the gun's "film" as .220 high-velocity. The palm print identification in the grip was also used in the Bond film Skyfall.

Q shows Bond the dismantled camera gun in its case.

Closeup of the grip

Bond imprints the camera gun so only he can fire it. This kind of security measure was also seen in Skyfall.

The camera gun on the ground

One of the Chinese agents tries to shoot Bond with his own gun.
Retrieved from "https://www.imfdb.org/index.php?title=Licence_to_Kill&oldid=1549561"
Categories: