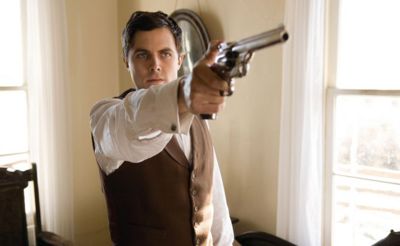 Casey Affleck fires a Smith & Wesson Schofield as Bob Ford in The Assassination of Jesse James by the Coward Robert Ford (2007).

Casey Affleck is an American actor who is known to film audiences for his role as Virgil Malloy in the Ocean's Eleven trilogy of films in addition to his roles in Good Will Hunting and The Assassination of Jesse James by the Coward Robert Ford (a role for which his portrayal of Bob Ford garnered him an Academy Award nomination for Best Supporting Actor). In 2017, Casey appeared as Lee Chandler in the film Manchester by the Sea, a role for which he received the Academy Award for Best Actor. He also is the brother of actor Ben Affleck, who directed him in the film Gone Baby Gone.