Assassination of Jesse James by the Coward Robert Ford, The

From Internet Movie Firearms Database - Guns in Movies, TV and Video Games
(Redirected from The Assassination of Jesse James by the Coward Robert Ford)
Jump to navigation Jump to search

The Assassination of Jesse James by the Coward Robert Ford is a 2007 Revisionist Western film directed by Andrew Dominik and chronicles the relationship between the impressionable Robert Ford (Casey Affleck) and his hero, the outlaw Jesse James (Brad Pitt) and the events that would lead up to the fateful confrontation. Adapted from Ron Hansen's 1983 novel of the same name, the film would garner two Academy Award nominations, including a Best Supporting Actor nomination for Affleck.

Frank walks through the train with his Remington '75.

Frank aims his Remington at a passenger. 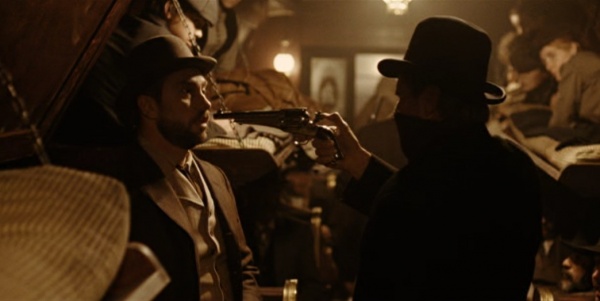 Frank lays in bed with his revolver. 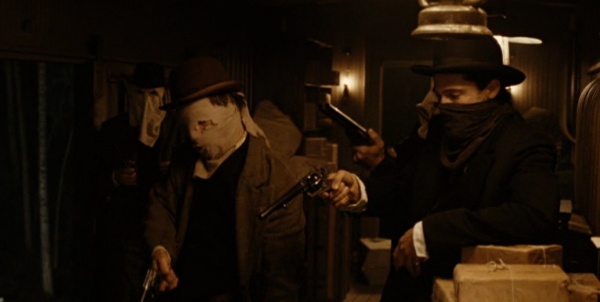 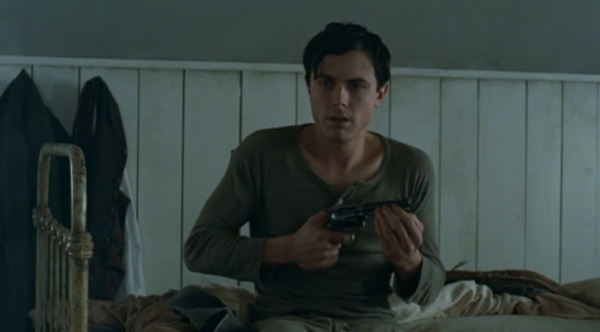 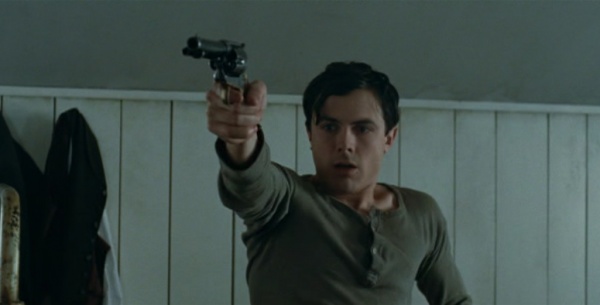 Bob with Charley's Colt after firing at Wood (Jeremy Renner).

Jesse places his two SAAs on the couch before dusting the picture on the wall. 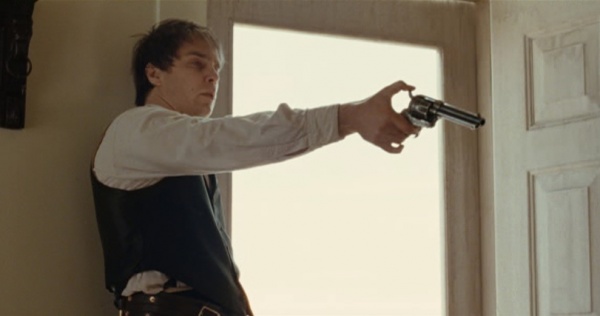 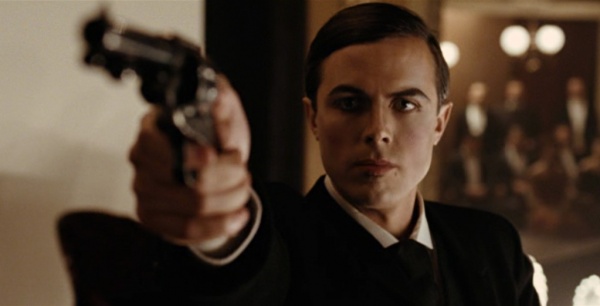 Bob aims an SAA during a stage re-enactment of Jesse's death. 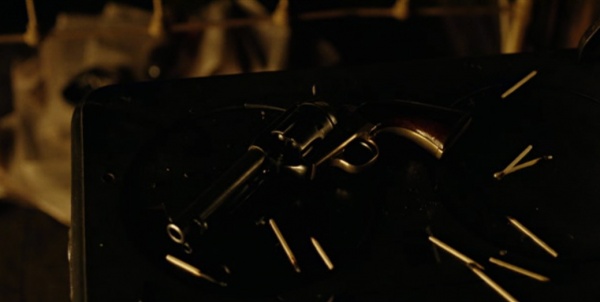 Charley's SAA sits on a table before he turns it on himself.

Dick (Paul Schneider) threatens Bob with his own "six-gun" (the Paterson only holds 5 rounds).

Dick Liddil (Paul Schneider) carries a Colt 1851 Navy, most notably seen during his shootout with Wood Hite and during his arrest. It looks like it might have a brass frame, so could be a Confederate copy of the Colt.

Dick aims the revolver at the door.

Dick hands over his Colt upon his arrest.

Jesse gives Bob Ford (Casey Affleck) a nickel-finish , Smith & Wesson New Model No.3 which Bob later uses to infamously shoot him in the back. 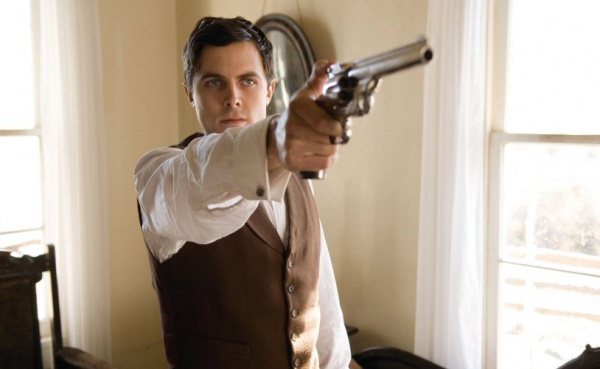 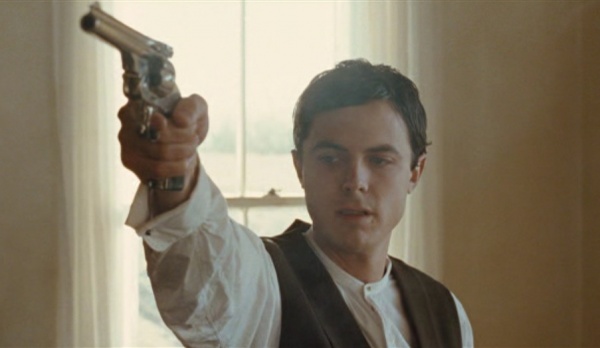 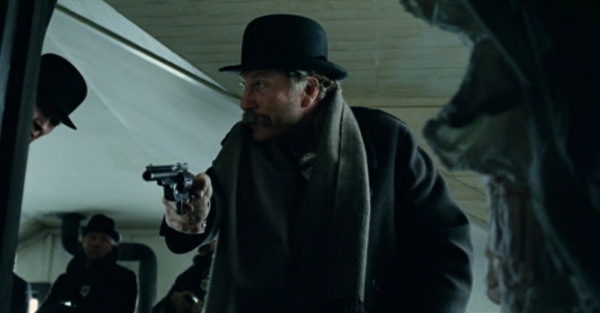 Some of the gang members during the James Gang's train robbery use Winchester Model 1873 rifles.

One of the posse members out to arrest Dick Liddil carries a Winchester Model 1866 "Yellow Boy" rifle.

A lawman aims his Yellow Boy.

Ed Miller (Garret Dillahunt) uses a 12 Gauge Double Barreled Shotgun during the opening train robbery. Some of the lawmen who arrest Dick Liddil also carry shotguns, as well as Edward O'Kelley (Michael Copeman) who in the films final scene is seen using one, but he is seen loading like a muzzleloading shotgun with a ram rod.

Ed (Garret Dillahunt) sits with Charley and his shotgun. 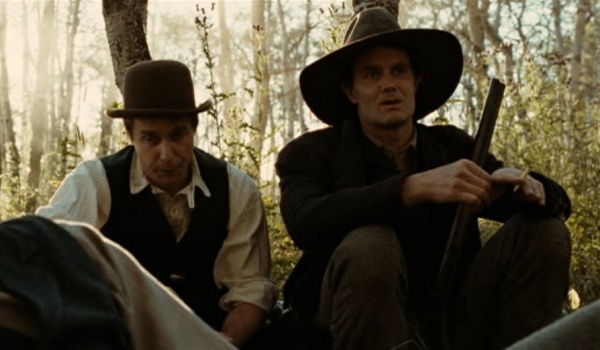 Ed with his shotgun.

A lawman with a shotgun is seen next to the lawmen with a Yellow Boy. 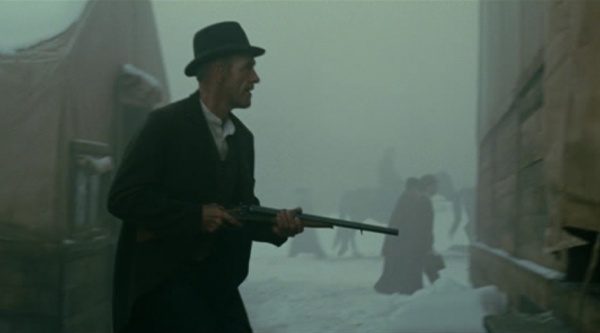 O'Kelley (Michael Copeman) enters the bar in Creede with his shotgun.