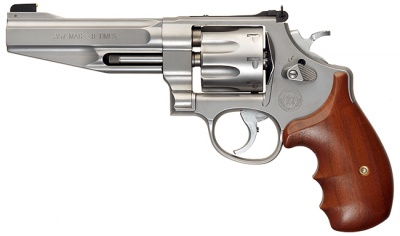 Smith & Wesson Model 627 Performance Center - .357 Magnum. This is the current production model with 5" barrel. It is an 8 shot revolver. 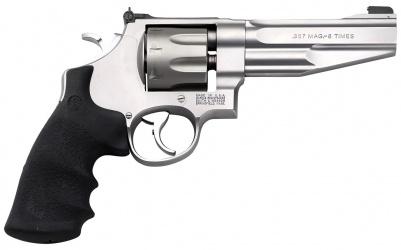 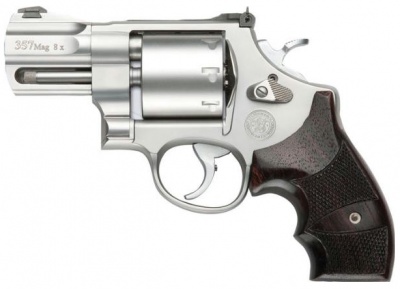 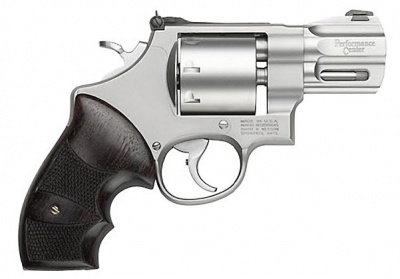 The Smith & Wesson Model 627 is a stainless steel revolver chambered in .357 Magnum with a somewhat complicated history. The Model 627 was initially released in 1989 and featured a 6 round unfluted cylinder, full length barrel underlug and contoured wood grips. On the side of the barrel the revolver was stamped ".357 MAGNUM MODEL OF 1989" so today it is often referred to as the "Model of 1989". Approximately 5000 of this model were made before production ceased in 1997.

When people refer to the "Model 627" today however, it is more likely that they are referring to the 8 shot "Performance Center" models which replaced the "Model of 1989" in 1997. These were made in several variants, but the most iconic are the 5" and 2.625" barrel variants with what is referred to as a "contoured slabside" barrel profile. The 2.625" snub nosed variant was made famous as the gun from Clint Eastwood's Blood Work, leading it to be given the affectionate nickname of the "Blood Work Revolver".

Although frequently identified by the "Performance Center" models, a standard catalogue variant with a conventional profile 4" barrel was released in 2008 but was quickly discontinued. An intermediate "Pro Series" variant was also launched at the same time which featured a 4" "contoured slabside" profile barrel, which is still offered by Smith & Wesson today.

The Smith & Wesson Model 627 and variants can be seen in the following films, television series, video games, and anime used by the following actors: