I undid the edits on Girl in the Spider's Web, The, as it is definetly not USP, no safety, which is distinct feature of USP. It is P2000 with a customized rail, it seems

Yes, was out of memory again. I've made some tweaks that will buy a couple weeks but the site actually needs to move to completely new hardware. I won't be able to do that until the 17th of June. --bunni (talk) 00:54, 9 June 2019 (EDT)

Hi, I uploaded this picture ... 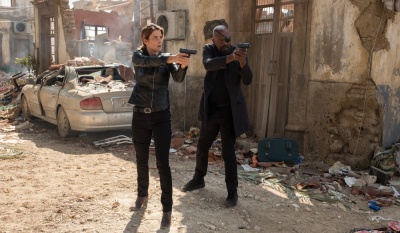 ... that I ment to use on the Spider-Man: Far From Home page but when I had uploaded it I noticed some information about copywright was attached to the file, so I am now unshure if I can use this picture. I'm not a native English speaker or know very much about copywright rules so if you could help me and tell me if I can use that picture on the page or not I would be very grateful.

I purposely replaced the two screencaps of the page since it's norm to have full-sized/non-cropped screenshots. I assume that you reverted them due to the big presence of the F-word, but... do we really enforce censoring curse words? As far as I've seen, censoring them is not a common practice on this site (unlike nudity), although I could be wrong. --Ultimate94ninja (talk) 08:22, 6 July 2019 (EDT)

Once Upon A Time In Hollywood

A SIMON rifle grenade seems to have appeared in Terminator: Genisys, fired by Sarah out of a helicopter in the middle of the film. I think you missed that in your screencaps. --Wuzh (talk) 00:15, 9 September 2019 (EDT)

Well, yes and no. Thing is, the blu-ray editions of 1985 incarnation are coming and the image quality of the PAL DVD collection I have is so "acceptable to unworkable" that it tends to make firearm identification harder than necessary. I see you have dumped the archived data on Season 5 and 6, but currently, I keep that stuff in discussion. I have some stuff already at Season 2's discussion page. But if you have yearning to do all the other seasons, I won't stop you. But once blu-rays of all the seasons are out, I'll get back to work with more conviction. TrickShotFinn (talk) 04:14, 12 September 2019 (EDT)

Splitting up the Star Wars pages

I am planning to split all the Star Wars "trilogy" pages into their individual film pages. The current format makes it difficult for readers to tell what weapons are found in each of the individual movies, and it's an unnecessary deviation from the format of the rest of the wiki. There is some support for this as can be seen on the Star Wars talk page. Seeing as you created the "trilogy" format originally, are you OK with me splitting up these pages? --Wuzh (talk) 18:03, 1 December 2019 (EST)

I'll just split out The Rise of Skywalker for now. It's unreleased anyways. I'll see if there is a way to get some of the screencaps that you want. No guarantees. --Wuzh (talk) 21:16, 1 December 2019 (EST)