Tomb Raider is the 2018 feature film reboot of the the film franchise based on the popular video game series with Alicia Vikander starring as Lara Croft. The character was previously adapted with Angelina Jolie as Croft in two films, beginning with 2001's Lara Croft: Tomb Raider. For the reboot, Lara in the film more closely resembles the newer version of the character, as seen in such games as Tomb Raider (2013).

Taking elements from both the 2013 video game reboot and its sequel, the film follows Lara's quest to find her missing father, which brings her to a mysterious island in the middle of the Pacific Ocean. There, Lara encounters a sinister organization known as Trinity, which seeks to weaponize the island's apparently supernatural powers.

The following weapons were used in the film Tomb Raider (2018):

Mathias Vogel (Walton Goggins) is armed with a Beretta 92FS (which appears to be the weapon of choice for the actor, having also wielded the pistol in such series as The Shield, Six and Justified). Vogel is a crack shot with the weapon, frequently tagging moving targets at extended ranges when men standing alongside him with assault rifles fail to hit anything.

Mathias Vogel (Walton Goggins) is armed with a Beretta 92FS.

Vogel's Beretta runs out of ammunition during the tomb shootout.

When his boat runs into the rocks near Yamatai, Lu Ren (Daniel Wu) grabs what appears to be a Russian SPSh Flare Pistol and fires it into the air.

When his boat runs into the rocks near Yamatai Island, Lu Ren (Daniel Wu) grabs the SPSh Flare Pistol.

Multiple Trinity soldiers carry a Glock 17 as their sidearm.

The Glock in a mercenary's holster as he fights with Lara.

The mercenary attempts to draw his Glock during his fight with Lara Croft.

A Glock in the holster of a mercenary guarding Lu Ren and the other prisoners.

One of the prisoners clutches the Glock 17. 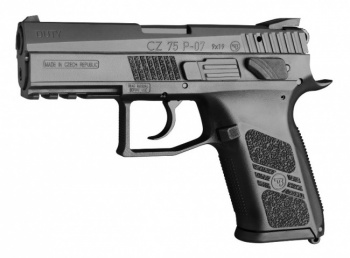 The pistol in the mercenary's holster before Richard Croft take it

In a continuity error, the CZ 75 P-07 Duty taken by Richard Croft (Dominic West) later switches to a Smith & Wesson 539 during the tomb shootout. 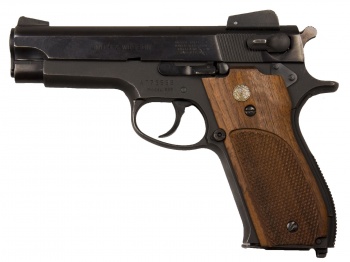 A closeup of the Model 539 as Croft reaches for it during a fight with an infected mercenary. 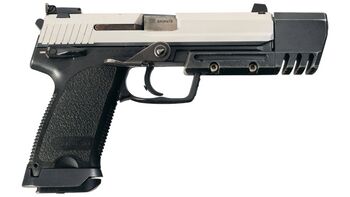 "I'll take two." Lara Croft (Alicia Vikander) handles twin two-tone Heckler & Koch USP Match pistols similar to the ones carried by Angelina Jolie in the first film. Note the pistol in her left hand has the extended left hand slide release like in the previous films.

Several Trinity mercenaries with Vogel are armed with the M4A1. Lu Ren (Daniel Wu) takes one fitted with an M203 grenade launcher, and an ACOG scope from one of the mercenaries.

Lu Ren (Daniel Wu) aiming through the ACOG scope while firing the M203 attached to the M4A1.

A Trinity mercenary can be seen with a Colt Model 933 fitted with an ACOG scope.

A Trinity mercenary can be seen with the carbine.

One of the Trinity mercenaries carries a railed-up AKM with an ACOG scope and M4 buttstock.

The mercenary on the right holds the the modified AKM.

The Heckler & Koch G3A3 is carried by the mercenary.

What appears to be an SAR M14 fitted with a Trijicon ACOG scope is used by a Trinity mercenary. 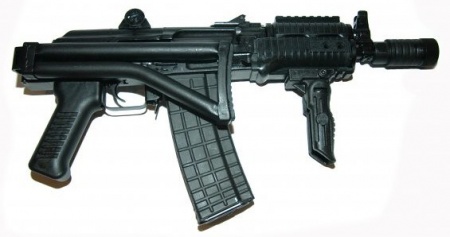 The SAR M14 is used by the mercenary.

The SAR M14 is carried by the mercenary.

Lu Ren (Daniel Wu) wields an Ithaca 37 shotgun when he first appears. He drops it when he falls over the railing of his ship, and it is never seen again.

Lu Ren (Daniel Wu) wields an Ithaca 37 shotgun while on his ship.

A short-barreled M203 grenade launcher is fitted to the M4A1 used by Lu Ren. The launcher is actually an airsoft replica with LMT markings.

A good look at Lu Ren's (Daniel Wu) M4A1 fitted with the airsoft LMT M203. Note the white LMT markings which are absent from a genuine LMT M203, and the different quick release mounts.

Lara is presented with a variety of weapons displayed in a cabinet at a London pawn shop.