KRISS USA Vector Gen 2.1 - .45 ACP / 9x19mm Parabellum. The SMG version is currently offered in the "Enhanced" configuration by default, which consists of a 6.5" barrel, a KRISS MK5 modular handguard and an ambidextrous folding stock.

In 2015, new "Gen II" versions of the original Vector models with redesigned pistol grips and safeties and compatibility with a new 9mm lower were announced. "Enhanced" versions were also made available, but these simply added accessories which could be bought separately, an AR15-style stock adaptor (provided with a Magpul UBR collapsible stock) and an angular shroud for the barrel on the CRB version (which later became standard on the Vector CRB since 2017). Post-2017 models of the Vector (often referred to by KRISS USA as "Gen 2.1") have a stock adaptor integrated into the upper housing, with a KRISS DS150 adjustable stock attached. The "Enhanced" versions of the short-barreled Gen 2.1 models have a 6.5" barrel, a KRISS MK5 modular handguard, and an ambidextrous folding stock. In addition to the original flat black, civilian versions are also available with factory Cerakote coatings in olive drab or flat dark earth. "Alpine White" and "Combat Grey" were later added. 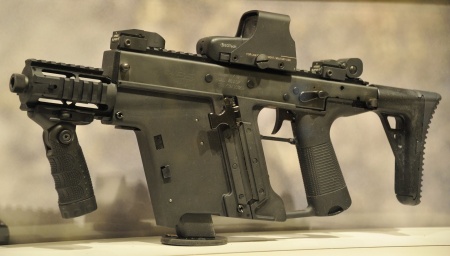