The Beretta held by Serena Unger when she appears for the first time. Note the straight dust cover, meaning this is likely a Beretta M9 and not a 92FS.

In a brief Beretta versus knife standoff, Serena points the pistol at Xander in a tender area, rather worryingly without displaying trigger discipline as she previously did.

Xander and Serena disarm each other, exchanging weapons in the process.

A Beretta is holstered by an attacker; Hawk later takes the pistol and uses it against him. Note the hex screws, meaning this is likely a Beretta M9.

Two-Tone Beretta 92FS - 9x19mm. This has a Stainless Slide on a standard Frame & Barrel.

The two-tone Berettas in the weapons case.

The pistol holstered by Serena.

Having taken her sidearm back, Adele wields it alongside a Glock 17.

Adele firing her Beretta in a reversed side grip method.

The Glock 17 is a prominently used pistol in the film.

Xiang (Donnie Yen) holds a Glock during a takeover.

Xiang with the Glock.

Xiang drops the Glock and flees.

Xander Cage (Vin Diesel) about to catch a Glock during a zero-gravity moment in the plane.

An operative aiming his Glock.

Both Adele Wolff and Serena Unger wield Glocks. At the left, Serena's Glock is a two-tone variant.

Note also how Serena's Glock is fitted with a 19-round magazine. 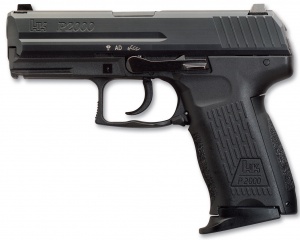 An attacker uses a Heckler & Koch USP Tactical against Xander and Xiang. While climbing up the stairs, Xander is able to identify it as a .45 caliber USP, and Xiang points out its use of a 12-round magazine. This comes in handy, since they manage to count the bullets remaining then overpower the attacker when he empties his weapon and attempts to reload it. 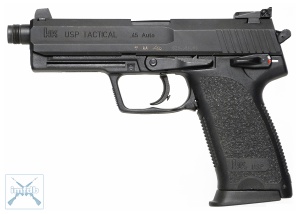 The attacker firing the USP at the duo.

The SIG-Sauer P226 is used at the start of the film, and then in the plane. 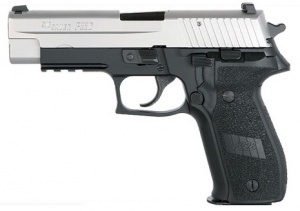 A guard carries what appears to be a Mossberg 500 Cruiser with an extended magazine tube.

The guard with his Mossberg at the top of the shot.

A shortened Remington 870 is used by a robber (Ken Tran) in the Chinese restaurant.

Remington 870 with a sawed-off barrel and stock - 12 gauge. The weapon in the movie has a stock, though.

The robber holds the Remington 870 on Gibbons.

The robber with the shotgun.

"GOAAAAAAAAL!" - Gibbons (Samuel L. Jackson) retrieves the Remington after his recruit Neymar Jr. (portrayed by himself) kicks a napkin holder at the robber's face.

Heckler & Koch MP5A3 submachine guns are used by some characters in the film.

A guard holding an MP5.

An attacker firing his submachine gun.

Another attacker with an MP5 on the left; note the railed handguard.

Agent Becky Clearidge (Nina Dobrev) picks up a Heckler & Koch MP5KA1 from the body of an assassin. 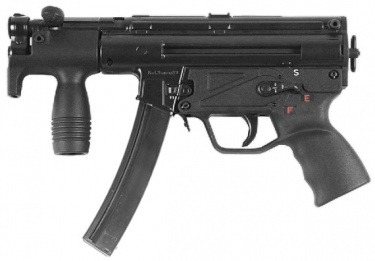 Becky holding her newly acquired MP5KA1 while hiding behind cover. She displays good trigger discipline, but this seems to be merely due to her status as a high tech specialist with knowledge in firearms...

...and clearly not to combat experience, since after taking a heavy breath, she gets out of cover and clumsily fires the weapon one-handed while yelling. She's fortunate enough to have hit her target with the first bullets, as the remaining ones obviously got sprayed all over the place.

Becky slips on the ground in an attempt to rush towards two incoming opponents, causing her to drop the gun, yet it manages to fire by itself on impact with the ground, luckily taking down the duo.

Serena somehow manages to talk on the phone while shooting. 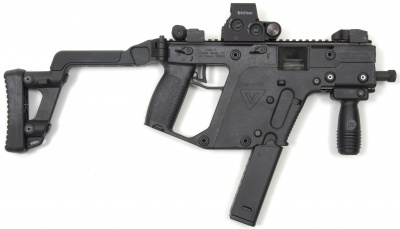 Hawk is out of ammo.

Hawk firing the Vector in a post-credits scene.

AK-47 rifles are used by party attendees on the island, as well as by some of the Russian soldiers.

A Russian soldier pointing his AK-47 at Nicks.

The woman at the left draws an AK-47.

Another attendee wielding an AK.

A soldier aiming his rifle at Serena.

The AKS-47 is also used during the raid on the island.

One of the Russian soldiers on the island uses an AK-104 loaded with a Bulgarian "waffle" pattern magazine.

The soldier aiming his carbine.

Tennyson Torch with his weapon.

The Colt Model 933 is used by the Dominican SWAT team.

Another operative aiming his Colt at Xander.

A CZ 805 BREN A2 is used by the leader of the Russian squad.

Captain Paul Donovan (Tony Gonzalez) carries a Heckler & Koch HK416 A5 fitted with a Geissele Automatics 14.5 Super Modular Rail handguard. The rifle is configured similarly to the one previously used in Suicide Squad.

Donovan with his rifle.

The M4A1 Carbine is used by various characters throughout the film.

Xander casually firing the M4, having guessed that it's loaded with blank rounds.

An M4A1-wielding attacker getting shot.

An M16A2 rifle is carried by a guard.

What appears to be a Mk 18 Mod 1 is seen when Xander Cage (Vin Diesel) brings one in a weapons case to the island. The Mk 18 is then used by Hawk (Michael Bisping), as well as by multiple gunmen.

The Mk 18 in the weapons case.

The rifle being held by Xander, with an EOTech sight.

Xander breaking the gun in half.

Hawk advancing with a Mk 18.

A Mk 18-wielding attacker being shot by Adele.

Another gunman firing his weapon.

Some soldiers can be seen carrying Norinco Type 56 rifles.

It isn't exactly clear why the front sight of this particular rifle is bent like this.

One of the guards in the Dominican Republic carries a Sa vz. 58 P.

Adele Wolff (Ruby Rose) uses a suppressed Barrett M98B in Africa. Despite the real weapon being bolt-action, it is depicted as semi-automatic in the movie.

Adele working the bolt after having loaded a magazine.

View through the scope. Hunting down lions like those unfortunate people are trying to do with their bows and arrows is a bad idea when Adele Wolff is around.

Adele about to release the bolt.

Browning M2HB machine guns are seen in the airplane's armory.

Two M2HB machine guns can be seen in the background at the left.

Two M240B machine guns are also present in the airplane.

M249 Paratrooper light machine guns are seen in the armory as well.

Mocked up grenades are carried by Xander Cage (Vin Diesel), Xiang (Donnie Yen), and Serena Unger (Deepika Padukone). They have "RGD-5" written on them in Russian, but they don't have the look of true RGD-5 hand grenades.

Note how the grenade's body has two belts, in contrast to the real RGD-5, which only has one. The "ИН" marking alludes to an inert grenade; in reality, dummy RGD-5 grenades have such markings below the belt, not above.