True Grit is the second feature film adaptation of the Charles Portis novel of the same name (the first being the 1969 classic John Wayne film). The 2010 film was directed by the Coen Brothers and Jeff Bridges starred as Deputy US Marshal "Rooster" Cogburn, and the cast included Matt Damon, Hailee Steinfeld, and Josh Brolin. The film's firearms were provided by veteran film property master Keith Walters, who has provided firearms for several recent Westerns including The Missing (2003) and Appaloosa. In an interview with True West magazine, Walters mentioned that several of the weapons seen in the film were replica firearms provided by Cimarron Fire Arms and Taylor’s & Co.

The following guns were used in the film True Grit (2010):

Mattie Ross (Hailee Steinfeld) carries her late father's 2nd Model Colt Dragoon, as described in Portis' book. It was waiting for her at the boarding house with his watch, knife and other of his 'traps' that Chaney hadn't stolen. Neither the boarding house landlady nor anyone else had seen fit to unload it for safety.

The gun used in the film is an actual percussion Dragoon, while the 1969 film used a cartridge-converted Colt Walker. It can be surmised that the Walker was used in the 1969 film due to its even more imposing size in contrast to Mattie's small stature. But the adherence to the source material in this version is much appreciated.

Deputy US Marshal Reuben J. "Rooster" Cogburn (Jeff Bridges) also carries a pair of revolvers in holsters that fit over his saddle horn. According to Keith Walters, these revolvers are 2nd model Colt Dragoons as well, despite them being referred to as "Navy Sixes". He uses them both in his famous charge at the end.

In both movies the Dragoon misfires at a critical point. The book explains this; while drunk, Rooster had used it to shoot a rat. Mattie insisted he re-load the two cylinders fired, which he did using defective old caps from a box under his bed - and still drunk. Jeff Bridges doesn't shoot the rat, and John Wayne used his Peacemaker, so viewers of both movies may get the unfair impression that Dragoons were simply unreliable.

Mattie's Dragoon. Her father had of course carried it loaded and capped - "If it ain't loaded.... it will not shoot".

Rooster with what appears to be a Colt Dragoon. 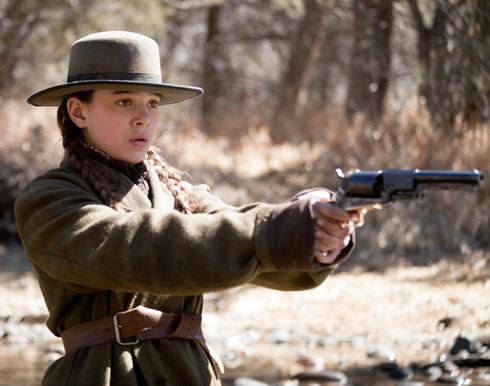 A production image of Mattie aiming her father's Dragoon. 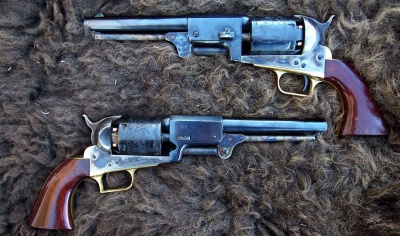 The pair of Colt Dragoons carried by Cogburn in the film. (From the Blu-ray Special Features).

Rooster with one of his "Navy sixes."

Rooster, reins in teeth, charges while dual-wielding his revolvers.

Rooster firing his revolvers with the reins in his teeth.

The primary firearm carried by Rooster is a Single Action Army Peacemaker. In the novel, it was stated that Rooster's "belt gun" was a .44-40, the same caliber as his Winchester. According to Walters, the revolver is a Colt Peacemaker with 7 1/2 inch barrel. Texas Ranger La Boeuf (Matt Damon) carries a Colt Peacemaker with ornate carved ivory grips. 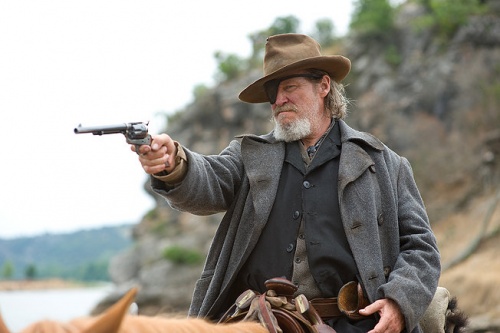 A production image of Rooster with his SAA, (note the missing cigarette).

The "Peacemaker" used by Matt Damon in the film. (From the Blu-Ray special features). 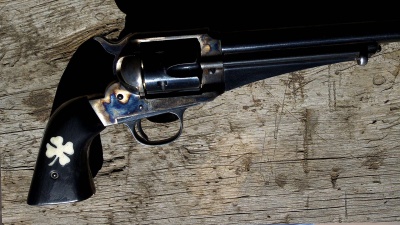 The Remington 1875 used by "Lucky" Ned Pepper (Barry Pepper) in the film. (From the Blu-ray Special Features).

Harold Parmalee (Bruce Green) carries a Smith & Wesson Schofield Model 3 as his sidearm. He is seen with the revolver out during the final confrontation with Rooster.

Harold Parmalee (Bruce Green) is seen with the Smith & Wesson Schofield Model 3 during the final confrontation with Rooster.

Rooster Cogburn (Jeff Bridges) carries a Winchester Model 1873 "Short" rifle as his long arm in the film. His questionable accuracy with the rifle might be due to the fact that he is shooting it right-handed while attempting to use the sights with his remaining left eye. A better notion would be to shoot left-handed, but Rooster seems very much like a proverbial 'old dog'.

"Lucky" Ned Pepper (Barry Pepper) wields a Winchester 1866 "Yellow Boy" during the famous charge at the end. This also appears to be the rifle carried by Clement "Doc" Parmalee.

Lucky Ned with the rifle.

True to the book, Tom Chaney (Josh Brolin) carries a Henry rifle. As in the original novel a length of rope is tied to both ends as a makeshift sling.

Chaney with the Henry slung over his shoulder.

As in the original novel a length of rope is tied to both ends as a makeshift sling.

When Mattie and Rooster confront the "Bear Man" or Dr. Forrester, he appears to be carrying a Hawken rifle on his horse.

The rifle on the doctor's horse.

La Boeuf (Matt Damon) uses a Sharps 1874 Cavalry Carbine throughout the film. Mattie is later seen using the Sharps. It is a weapon of uncanny power and precision.

Le Boeuf drawing a bead on "Lucky" Ned Pepper with his Sharps. 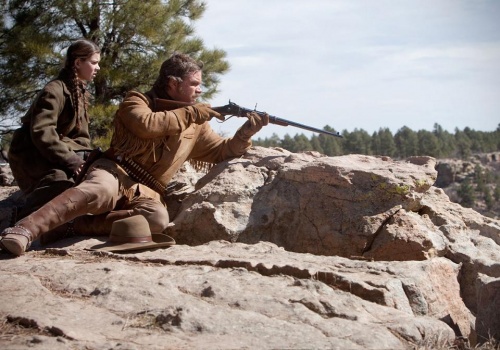 Le Boeuf setting up with his Sharps as Mattie looks on.

A 12 Gauge Double Barreled Shotgun is carried by a passing Native American who fires it offscreen to signal that they are being followed.

A 12 Gauge Double Barreled Shotgun is carried by a passing Native American who fires it off screen to signal that they are being followed.

A Colt 1878 Coach Gun is carried by Farrell Parmalee, one of the Parmalee brothers of "Lucky" Ned Pepper's gang.