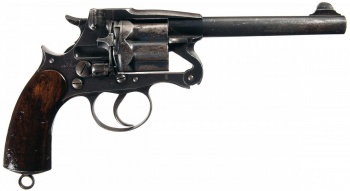 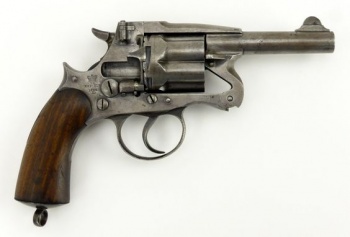 Enfield Mk.II with 4" barrel - .476 Enfield. Issued to the 3rd military district, Australia. Used through WWII as an emergency substitute. 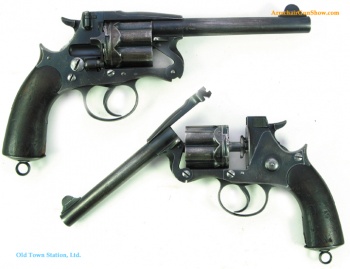 Not to be confused with the Enfield No. 2.

The design of the revolver, patented in the second half of the 1870s, was proposed by the inventor from Philadelphia, Owen Jones, who worked for the Royal Small Arms Factory. In August 1880, this revolver was adopted by the UK with the designation Enfield Mk I, replacing the Adams Mk III.

The Enfield Mk I is a double-action break-open revolver with unusual cartridge cases extraction. When the revolver opened, the barrel went down, and the cylinder simply moved forward along the axis. At the same time, the spent cartridges were held by a gear extractor in a fixed breech, from where they were then thrown out. A massive protrusion under the barrel served to create the necessary effort.

However, its trials revealed other minor flaws, and in April 1881 a new modification was presented.

The new modification of the revolver received a rounded front sight, which made it easier to remove the weapon from the holster; chambers had a tapering shape in case the bullet turns out to be loosely seated in the cartridge case; the upper jumper made a single whole with the frame, and a stopper was added to the structure to prevent accidental rotation of the drum when worn in a holster. The grips, "grooved" in the first models, became smooth, and the cylinder stopper was connected to the loading gate, which, when opened, locked the trigger. The latter, in particular, prevented the possibility of accidents if, while reloading the weapon, the shooter accidentally pulled the trigger.

The modified revolver was approved under the official designation Enfield Mk II in March 1882 and was adopted by the UK. The Enfield Mk II was in service with the British Army until 1890.

The Enfield Mk II and variants can be seen in the following films, television series, video games, and anime used by the following actors: