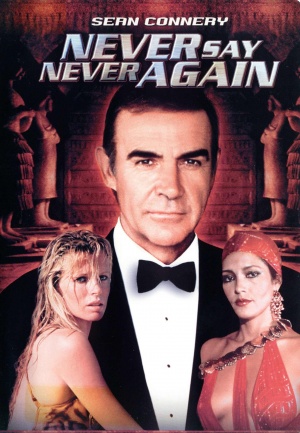 Never Say Never Again is the 1983 action film that saw the return of Sean Connery to the role of James Bond. The cast included Kim Basinger, Barbara Carrera, and Klaus Maria Brandauer. The film was directed by Irvin Kershner (The Empire Strikes Back and RoboCop 2) and was released in the same year as the official EON entry Octopussy.

This film is not part of the official James Bond film series, but rather a remake of the Bond film Thunderball, which was based on a story by Kevin McClory, Jack Whittingham and Ian Fleming (legally, in that order.) McClory and Fleming had started collaborating together in 1958 on an original screenplay for what was supposed to be the first James Bond feature film. When the proposed film turned out to be financially unfeasible, Fleming turned this screenplay, which was finished with the help of Whittingham, into the novel Thunderball without crediting either McClory or Whittingham. McClory and Whittingham immediately sought an injunction to stop publication, and in the ensuing settlement McClory was awarded the film rights to Thunderball, which he licensed to MGM/UA for ten years. Once MGM/UA's license expired, McClory worked for years to make another version of Thunderball, with Never Say Never Again as a result. McClory sought to make yet another adaptation of Thunderball in the nineties, but was thwarted by legal action brought by MGM/UA. MGM/UA was finally able buy the rights to Thunderball (in addition to other McClory elements such as SPECTRE and Ernst Stavro Blofeld) from the McClory estate in late 2013 and these elements were incorporated in the official EON Bond film Spectre.

The following weapons were used in the film Never Say Never Again:

Rather than his traditional Walther PPK, James Bond (Sean Connery) carries the more modern Walther P5 in this film, presumably to appease the manufacturers, who were trying to promote the new pistol at the time. He fires it only twice in the film. Interestingly, Roger Moore as Bond also carried the P5 in Octopussy, the official James Bond film released in 1983 (as opposed to this unofficial attempt by Warner Brothers). 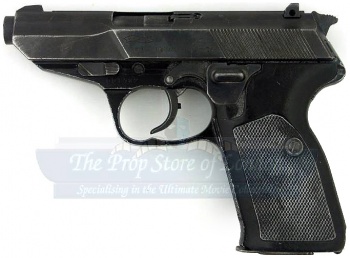 Bond turns with his P5 when Felix enters the casemates.

Bond with his suppressed HSc. This was likely used due to its similar appearance to the PPK.

While at the private party, Bond takes a nickel-plated Nambu Type 14 off one of Largo's henchmen and forces him to hide in a closet, holding a "bomb" (cigar case). The pistols appears to be the small trigger guard version of the Nambu. Nickel-plated guns were usually awards or private purchase items and were highly prized 'bring backs' from the Pacific Theater. He eventually dumps the pistol in an ice bucket. 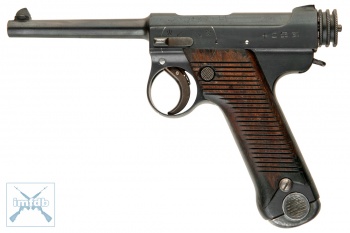 Bond holds the henchnan's own Nambu on him.

Bond puts the Nambu pistol in an ice bucket.

The thugs led by Fatima Blush (Barbara Carrera) in the tunnel during the chase scene are seen using Beretta 93Rs to try and corral Bond into a truck, with at least one of the pistols being fitted with a stock. This is the first screen appearance of the 93R in an English-language film. 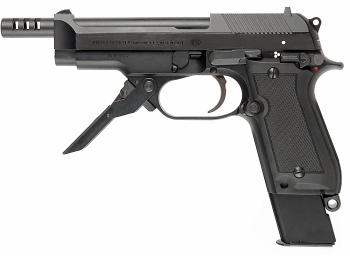 A thug approaches Bond with his 93R. Note the stock tucked underneath the man's arm.

In the opening sequence of the film, James Bond (Sean Connery) equips himself with a Czech Sa 25 submachine gun taken from a revolutionary he has just incapacitated. 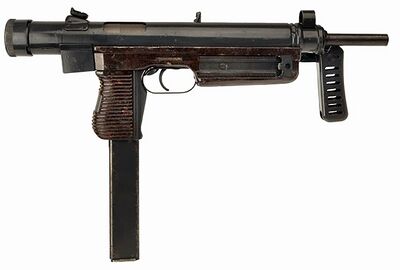 James Bond (Sean Connery) with his Sa 25 during the opening sequence.

Revolutionaries in the opening sequence of the film are seen carrying Madsen M50 submachine guns.

Revolutionary with a Madsen.

During the North Africa sequence, one of the guards is seen carrying a French MAT-49.

One of Largo's guards in North Africa with a MAT-49.

Beretta M12s can be seen several times throughout the film. One of the guards in the North Africa sequence is seen using one. In the Tears of Allah sequence Beretta M12 SMGs are briefly seen being used by Largo's men. The Beretta M12s are also seen in a weapons rack in the Q branch. 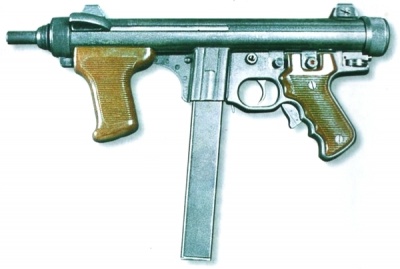 The Beretta M12s on a weapons rack in Q branch.

Bond, Felix Leiter (Bernie Casey), and the US Navy SEALs/UDT in the Tears of Allah scene are seen wielding MAC-10s as their weapon of choice. 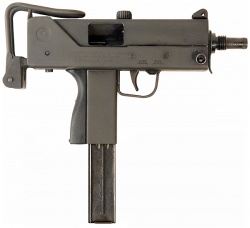 Bond takes a MAC-10 from Felix.

Bond's MAC-10 about to be shot from his hands.

Felix fires at Largo's men with his MAC-10.

One of Largo's men before he is killed.

MP5 slung over the back of one of Largo's men.

One of Largo's men with an MP5 gets incapacitated by a flash-bang round from the Arwen 37.

Some of the U.S. Navy SEALs are seen using M3 submachine guns.

A SEAL fires his Grease Gun, telling Felix to stay down.

A Navy SEAL on the far left with the Grease Gun during the battle.

An AK-47 with the pistol grip removed and a 10-round magazine (to make it resemble an SKS), is seen used by a guard who enters a cell which James Bond has escaped from.

The guard with his AK-47. The rifle has the pistol grip is removed and loaded with a 10-round magazine (to make it resemble an SKS).

One of the Bandits in the North Africa sequence can be seen using a Lee-Enfield No. 1 Mark III.

One of the bandits chambers a fresh round in his Lee-Enfield No. 1 Mk III .

A Bandit is seen with a Henry 1860 lever action rifle.

Note the Bandit with a Henry 1860 rifle.

Bandit fires his lever action at Bond and Domino.

Some of the bandits who try to "purchase" Domino (Kim Basinger) in the North Africa sequence are armed with VZ-98/22 Czech Mauser rifles.

A bandit with his Czech Mauser.

A PIAT is seen in the Q Branch.

Note the PIAT mounted on a machine gun stand vaguely seen close up in Q branch.

An Arwen 37 is seen used by Felix Leiter amongst the Navy SEALs in the Tears of Allah scene, using it to incapacitate Largo's Men.

Felix with the Arwen 37.

Another shot of Felix with the Arwen 37.

While on the target range, Q demonstrates a concealed firearm disguised as a fountain pen. This particular weapon fires an explosive round. Bond later uses the weapon.

While on the target range, Q demonstrates a concealed firearm disguised as a fountain pen.