Godzilla vs Kong is the 2021 crossover film which pits the kaiju, who was introduced in 2014's Godzilla and 2019's Godzilla: King of the Monsters against perhaps his most famous rival, King Kong, who was introduced in 2017's Kong: Skull Island. The plot finds a team of scientists transporting Kong to the entrance of "Hollow Earth", where he subsequently finds himself in a confrontation with Godzilla, who is exhibiting a disturbing difference in his behavior than from his previous encounter with humans. The cast includes Alexander Skarsgård, Rebecca Hall, Eiza González, and Demian Bichir in addition to returning "MonsterVerse" cast members Millie Bobby Brown and Kyle Chandler (who coincidentally also starred in the 2005 Peter Jackson remake of King Kong, marking his second encounter with the titular creature). The film, which is the fourth installment in Warner Bros.' "MonsterVerse", was released theatrically on March 24, 2021, and on the streaming platform HBO MAX on March 31, 2021.

The following weapons were used in the film Godzilla vs. Kong:

The Browning M2 is seen mounted on US Humvees.

The Browning M2 machine gun is seen mounted on the US Humvee seen in the center.

a US Humveee has a Browning M2 machine gun mounted.

US Navy warships are seen armed with the Phalanx CIWS.

The CIWS is seen in the white dome at the end of the US aircraft carrier as Kong and Godzilla fight.

The General Dynamics GAU-22/A is the secondary armament of the US Navy F-35B Lightning II fighters who engage Godzilla on the open sea. The US Navy, in reality, only operates the F-35C.

US Navy F-35B Lightning II fighters seen on the flight deck of an aircraft carrier.

The M230 Chain Gun appears to be the armament used by the Hollow Earth Aerial Vehicles (HEAV)s in the film.

An HKPF officer is seen armed with what appears to be an M16A4 rifle.

At the left, an HKPF officer is seen armed with what appears to be an M16A4 rifle.

Apex operatives appear to carry both Taser X26P pistols and rifles as their chief armament. 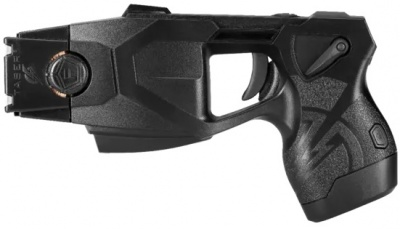 An APEX employee appears to pull a pistol that resembles a Taser X26P.