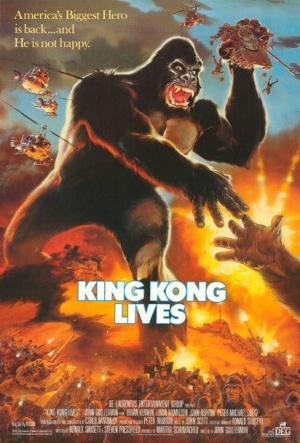 King Kong Lives is the 1986 sequel to the 1976 adventure film remake. King Kong director John Guillermin returned as director and Dino De Laurentiis returned as producer. Set 10 years after the 1976 film, the sequel follows Kong, who is brought back to life and subsequently escapes his captors. The film's cast includes Linda Hamilton and Brian Kerwin.

The following weapons were used in the film King Kong Lives:

Visible in Nevitt's holster as he speaks to Dr. Amy Franklin (Linda Hamilton).

A mortally wounded Nevitt fires at Kong in the cemetery at the end of the film.

Jay (Herschel Sparber), one of the hunters who try and capture Kong, wields a Marlin Model 336 at his buddies, as they start taunting Kong. It is distinguished from the Winchester Model 1894 by the side ejection port and flat-top receiver.

Jay works his Marlin's lever action threateningly, in an attempt to stop his buddies from taunting Kong.

M16A1 assault rifles are used by Nevitt's men throughout.

In the hands of the soldier in the gas mask to the right.

The soldier on the bottom right takes aim with his M16.

An M203 grenade launcher is seen mounted on one soldier's M16.

Two soldiers wield M2 flamethrowers against Kong in one scene.

The soldiers fire their flamethrowers.

An M134 Minigun is seen mounted on helicopter gunships which strafe Kong atop the World Trade Center in stock footage from the previous film during the pre-credits sequence. 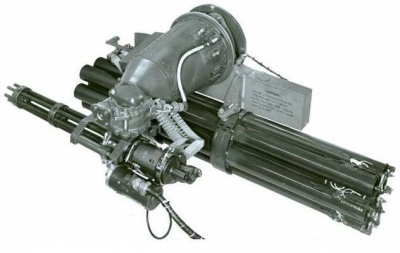 Nevitt leans against the Browning M2 mounted on his Cadillac M114 APC.

When Kong happens upon a small lakeside town, an elderly man shoots at him ineffectually with a shotgun.

The hunters who go after Kong use a variety of different shotguns (mostly lever action) and a few rifles.

Note Leon Rippy, second from the left in blue shirt.