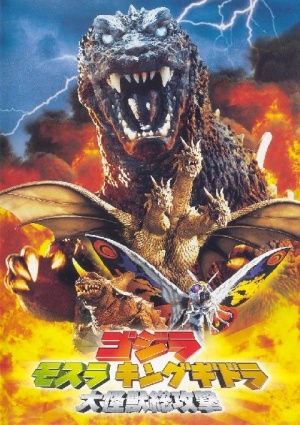 Godzilla, Mothra and King Ghidorah: Giant Monsters All-Out Attack (shortly GMK) is the 25th entry in the Toho produced Godzilla film series and 3th in the Millennium era. It has the longest title of all franchise and also appears to be the most somber one. The story depicts Godzilla as a nigh-unstoppable undead abomination, motivated by the spirits of those killed during the Pacific War and driven to punish modern Japan for their attempts to ignore the atrocities their nation committed fifty years earlier. He is opposed by Baragon, Mothra and Ghidorah who appear as guardians of Japan.

In the scene of the appearance of Baragon a police officer fires at monster with his revolver. The gun isn't seen clear enough but it is supposed to be a movie prop version of the Nambu Model 60, which was the service sidearm of Japanese police.

The police officer bravely but senselessly fires at the monster.

Baragon, of course, is unfazed by this and irritably roars at the police officer, who is physically pushed back by the noise.

Unlike most other movies, JSDF personnel are armed with M16-style rifles rather than Howa Type 64s. They are fitted with A1- and A2-style handguards.

Soldiers march with M16s in hands.

M16A2-style handguard can be seen at the left.

A barrel with "birdcage" flash hider can be seen.

A Phalanx is seen on a Kongo-class destroyer (under a fictional name JMSDF Aizu) as Godzilla prepares to destroy it.

A physical model M2 Bradley with 25-mm cannon is seen at the right.
Retrieved from "https://www.imfdb.org/index.php?title=Godzilla,_Mothra_and_King_Ghidorah:_Giant_Monsters_All-Out_Attack&oldid=1311015"
Categories: