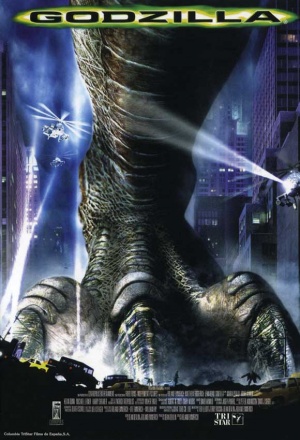 Godzilla is the 1998 American "reimagining" of the legendary radioactive "kaiju" first featured in the original 1954 Japanese science fiction film. Directed by Roland Emmerich, the film was lambasted by critics and by fans of the Toho-produced series. This particular version of the creature would be lampooned in the subsequent Japanese-made 2004 Godzilla film Godzilla: Final Wars. A new US feature film adaptation directed by Gareth Edwards was released in 2014.

The following weapons were used in the film Godzilla (1998):

The French DGSE agents, including Agent Philippe Roche (Jean Reno), bring Heckler & Koch HK94A3 carbines, converted to Heckler & Koch MP5A3 submachine guns, when they infiltrate Godzilla's nest in Madison Square Garden (one of which has a Surefire flashlight grip). Some of the U.S. soldiers in the movie are also seen with the pseudo MP5A3s.

A Heckler & Koch HK94A3 converted to a resemble an MP5A3, with a chopped barrel and converted to auto, with a third firing position added to the lower receiver.

DGSE Agent Jean-Claude (Philippe Bergeron) armed with an Heckler & Koch HK94A3 chopped and converted to resemble an MP5A3 and fitted with a Surefire flashlight grip.

Jean-Claude with his HK94A3. Note that there is a continuity error here: His weapon no longer has the SureFire foregrip.

The soldier in the center fires his HK94A3.

The M16A2 is used by U.S. Army personnel throughout the movie. During the scene in the French DGSE warehouse, several agents are seen unloading crates full of M16A2s and laying them on tables.

In Panama, a U.S. soldier holds an M16A2 as Dr. Tatapolous arrives.

Soldiers aiming their M16A2s at Godzilla.

Soldiers fire their rifles at Godzilla.

Weapons lined up at the abandoned warehouse commandeered by DGSE; visible are many M16A2s, plus some disassembled RPG-7 rockets (missing their second half which is screwed on when prepping for loading).

Some of the M16s seen in the movie are actually M16A1s fitted with M16A2 hand guards, likely due to a shortage of genuine M16A2s on-set.

Soldiers firing their M16s at Godzilla. As evidenced by the rear sights, these are actually M16A1s with A2-style hand guards. (Though the M16A1 on the right seems to be fitted with a larger windage adjustment knob in order to more closely simulate the appearance of an M16A2).

During the U.S. Army's confrontations with Godzilla, several soldiers are seen firing M4A1 carbines, which have had their carry handles removed and replaced with C-More (CTAC) sights, and have something attached directly above the barrel. These are the exact same M4s used in Air Force One (which had the same armorer as this movie - Harry Lu).

At the scene of the first trap, several U.S. soldiers open fire upon Godzilla. The soldiers are armed with (from left to right), DefTech 37mm launchers, M4A1 carbines, and at least one Heckler & Koch MP5A3. The soldier in the back right, nearest to the tank, is firing an AT4.

AK-47 rifles can be seen in the hands of Ukrainian soldiers when they arrived in the Chernobyl exclusion zone via helicopter. From these scenes, it appears the Ukrainian soldiers are armed with the original, milled-receiver AK-47s and not the more modern AKM and AK-74 rifles the real-life Ukrainian Army is armed with. Note that they inaccurately exit a 1950's era Boeing Shawnee tandem rotor helicopter of US Origin.

AK-47 rifles can be seen in the hands of Ukrainian soldiers when they arrived in the Chernobyl exclusion zone via helicopter.

When Godzilla charges a U.S. Army roadblock, some of the soldiers are shown firing at him with, oddly, Street Sweeper shotguns, a weapon that has never been used by any branch of the U.S. military.

The soldier in the center has an HK94A3, while the one on the right is firing a Street Sweeper.

When the military has set its first trap and is waiting for Godzilla to show up, at least one soldier can be seen wielding a Franchi SPAS-15 combat shotgun, yet another weapon which is not used by the U.S. military.

The soldier on the left is holding a Franchi SPAS-15.

The M60 machine gun appears in the film mounted on Humvees firing at Godzilla.

The M60 seen on the left. In this scene, the M60 appears to be a rubber replica normally used in stunt work (as evidenced by the fact that the flash hider is filled-in).

A Humvee fitted with an M60 machine gun.

During the military's second attempt to lure Godzilla into the open and take him down, one of the soldiers accompanying Sgt. O'Neil is carrying some type of belt-fed machine gun that has no ammunition box or belt. Judging by the weapon's appearance and the fact that it has a forward grip and folded bipod, it appears to be either a Heckler & Koch HK21 or HK23, though this is not certain.

Heckler & Koch HK21 Machine Gun - 7.62x51mm NATO. This version does not have the vertical grip seen on the HK21 that appears in the movie.

A soldier follows O'Neil on the right, armed with what appears to be an HK21 or HK23.

Another shot, showing clearly the H&K-style front sight and barrel.

The soldier with the possible HK21/23 can be seen to the right of Sgt. O'Neil, and just left of the soldier with the M60. Note that the weapon seems to be a belt-fed machine gun with a bipod, but there is no ammunition belt or box installed.

The M2 seen on the right.

The Browning M2 seen on the left.

AH-64 Apache gunships are seen opening fire with what appear to be dual pylon-mounted machine guns instead of the 30mm chain gun.

Firing the machine guns on the Apache.

While the Apache's chain gun is seen, only the fake side machine guns are shown firing.

Some of the U.S. soldiers are shown using DefTech 37mm launchers, including Sergeant O'Neil (Doug Savant). Some are also seen on a table in the DGSE warehouse where weapons are being unpacked. As in most Hollywood movies, the DefTech (and similar 37mm launchers) is inaccurately depicted as a weapon capable of firing HE grenades, whereas in real life it can only fire less-than-lethal ordnance.

O'Neil fires his DefTech 37mm at Godzilla, while the soldiers around him let loose with their M16A2s.

Some of the U.S. soldiers in the film fire at Godzilla with M136 (AT4) rocket launchers. More are also visible in the DGSE warehouse where the weapons are being unpacked.

U.S. soldiers prepare to fight Godzilla; the soldier on the far right is armed with an M136 (AT4).

Weapons lined up at the abandoned warehouse commandeered by DGSE; visible are many M16A2s, plus some RPG-7 rocket heads.

One soldier is seen carrying an M16A2 rifle fitted with an M203 grenade launcher.

On the right, a soldier is seen carrying an M16A2 rifle fitted with an M203 grenade launcher.
Retrieved from "https://www.imfdb.org/index.php?title=Godzilla_(1998)&oldid=1337589"
Categories: