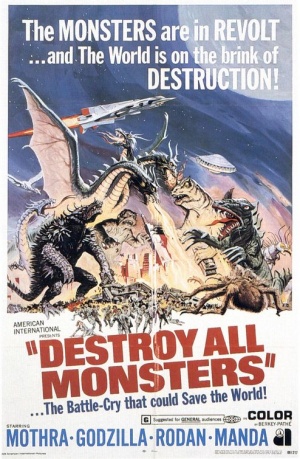 Destroy All Monsters is the ninth entry in the Toho produced Godzilla film series, as well as Toho's 20th kaiju film (and in the time of filming it was intended to be the final Godzilla film). In this film an alien race establishes a mental control over all Earth monsters and uses them against mankind. But their plans fail at last, and a motley crew of Godzilla, Anguirus, Rodan, Gorosaurus, and other kaiju triumphs over the ultimate weapon of the aliens, the three-headed King Ghidorah.

Note: Most weapons in this film are merely toys. Only those that bear resemblance with real ones are listed on the page.

The following weapons were used in the film Destroy All Monsters:

A group of plain-clothed detectives use M1911A1-style pistols during a shootout with Kilaak-controlled humans.

A police detective fires his pistol during a shootout with the Kilaaks.

During the encounter in laboratory on Ogasawara island one of the security guards fire a submachine gun that distantly resembles an MP40.

The guard fires his gun.

A pink muzzle flash is typical for flashpaper guns used in Japanese movies.

Rifles that resemble Howa Type 64 (the most modern firearm for 1968) are seen in hands of JSDF personnel.

A soldier holds his rifle. It is supposed to be a plastic toy but bear enough resemblance with a real gun.

In one scene a unit of JSDF is seen, armed with rifles that distantly resemble M14s.

The unit retreats when Godzilla appears.

A soldier in the middle carries a bright silver tube in Bazooka style.
Retrieved from "https://www.imfdb.org/index.php?title=Destroy_All_Monsters&oldid=1139141"
Categories: