Doctor Strange in the Multiverse of Madness

Doctor Strange in the Multiverse of Madness is a 2022 superhero film directed by Sam Raimi and written by Michael Waldron (Loki). It is the twenty-eighth film in the Marvel Cinematic Universe, the fifth film of Phase Four, and a sequel to Doctor Strange, WandaVision, and Spider-Man: No Way Home.

After the events of WandaVision, covered by the dark magic of the Darkhold, Wanda tries with all her might to return her dead children, for which she needs the superpowers of America Chavez, a teenager with the ability to travel through alternate universes. Arriving in the MCU's home universe, the girl finds herself under the protection of Doctor Strange and other Masters of the Mystic Arts, which forces Wanda to go against her former allies.

Some characters from previous MCU and non-MCU installments make cameo appearances, such as Charles Xavier portrayed by Patrick Stewart from the X-Men Series or the first appearance of Anson Mount as Black Bolt from Inhumans in a completely canonical MCU project. The movie, together with WandaVision, Loki, What If...?, and Spider-Man: No Way Home, is included in the Multiverse story arc. The film was released on May 6, 2022.

The following weapons were used in the film Doctor Strange in the Multiverse of Madness:

After the defeat of the ancient monster Gargantos, NYPD officers with holstered Glock 17 pistols clear the battlefield and help the victims at the beginning of the film.

The officer's pistol is visible in the background as Strange and Wong introduce themselves to America Chavez.

Another officer quickly passes behind America in Mancini's pizzeria.

Many Masters of the Mystic Arts use bows with magic arrows during the Battle of Kamar-Taj.

Masters go to the platform, preparing for battle.

The archers hold the Scarlet Witch at arrowpoint.

Wong leads the archers in the midst of a battle.

A line of archers on a roof shoot at the enemy.

Single shot of a Master with a bow.

Masters of the Mystic Arts, including Sara Wolfe (Sheila Atim), summon mortars from portals and fire at Scarlet Witch during the Battle of Kamar-Taj.

The artillery crew deploys and aims the gun at the target.

The Master reloads the gun after firing.

With one movement of her hand, the Scarlet Witch destroys the artillery crew along with the tower.

A sticker with a Molotov cocktail is pasted on a lamp post on a New York City street.

The sticker is visible behind Strange while talking to America. 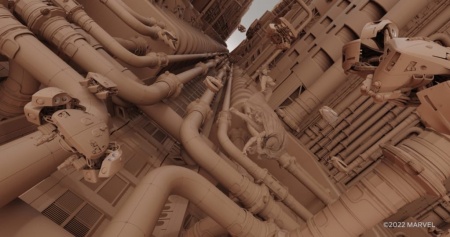 The early render of the Pipe World.

Several armed drones fly past the falling Strange and America.

Ultron's Sentries serving the Illuminati on Earth-838 fire lasers at Wanda as she breaks into their headquarters.

...but she destroys them all with ease.