Thor is the 2011 feature film adaptation of the Marvel comic book series. Directed by Kenneth Branagh, the film stars Chris Hemsworth as the God of Thunder and is part of "Phase One" of the Marvel Cinematic Universe that includes Iron Man, Iron Man 2, The Incredible Hulk, and Captain America: The First Avenger and culminated in 2012's The Avengers. Hemsworth would return as the God of Thunder in several direct sequels: 2013's Thor: The Dark World, 2017's Thor: Ragnarok as well as 2022's Thor: Love and Thunder in addition to 2015's Avengers: Age of Ultron, 2018's Avengers: Infinity War and 2019's Avengers: Endgame.

The following weapons were used in the film Thor:

Several guards are seen with Glock 17s when they respond to Thor's break-in into a SHIELD base.

Thor dispatches a Guard armed with a Glock 17.

One of the guards trying to take down Thor has a holstered Glock.

A Walther CP99, a CO2 powered air pistol version of the Walther P99 as evident by the slide markings reading "CP99" and the non proprietary accessory rail, can be seen in the SHIELD armory. 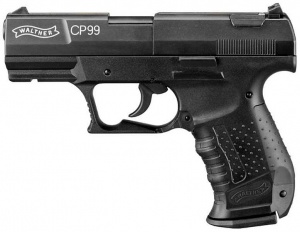 A Walther CP99 can be seen under the Beretta 92FS.

A Beretta 92FS can be seen in the SHIELD armory.

An M1911A1 with a tactical flashlight is seen in the SHIELD armory.

An FN P90 can be seen in the SHIELD armory.

A guard at a SHIELD base containing Mjölnir is seen with an M4A1 Carbine with a tactical flashlight before being disarmed and bashed by his own weapon by Thor (Chris Hemsworth). Several guards are also seen with it with C-More red dot sights attached, notably the various SHIELD men patrolling the area.

A guard aboard a golf cart with an M4A1 Carbine before being ambushed by Thor.

The same guard guard gets his M4A1 Carbine snatched from his hands by Thor.

Thor knocks the same guard unconscious with the guard's rifle.

The guard to the left points his M4A1 Carbine at Thor.

Guards aiming their M4A1 Carbines fitted with tactical flashlights at Thor after he attempts to use the Mjölnir hammer.

An M16A4 fitted with a C-More red dot sight and KAC railed handguard can be seen in the SHIELD armory. It is also carried by some of the SHIELD security personnel inside the temporary base.

An M16A4 with a C-More red dot sight can be seen in the SHIELD armory.

A short-barrelled SIG SG 552 assault rifle with pronged flash hider, standard diopter sights and the stock folded can be seen in the SHIELD armory.

Agent Barton initially reaches for a Remington 700PSS sniper rifle before opting for a compound bow.

A Remington 700 about to be reached by Agent Barton.

Volstagg (Ray Stevenson) is seen carrying a Remington 700 in a deleted scene during the evacuation of the town.

Volstagg with the Remington 700

An X26 Taser is used by Darcy Lewis (Kat Dennings) to stun Thor after Thor's banishment to Earth, claiming that Thor was "freaking" her out.

Darcy aims an X26 Taser with a laser module at Thor.

Darcy checks her taser before Thor sheepishly bumps into the back of the utility vehicle.

A Compound Bow of unknown type is used by Hawkeye (SHIELD Agent Clint Barton) (Jeremy Renner), choosing it over a Remington 700 sniper rifle when intercepting Thor at the SHIELD base, but never gets to use it.

Agent Barton (a.k.a. Hawkeye) reaches for a compound bow. The rifle above is an M4A1 Carbine, which is briefly visible when the camera starts to focus on Hawkeye.

Hawkeye aiming the compound bow as Thor is detained by SHIELD agents.