Eternals is a 2021 superhero film, based on the Marvel Comics series of the same name. This is the twenty-sixth feature film in the Marvel Cinematic Universe and the third feature film of Phase Four (following Black Widow and Shang-Chi and the Legend of the Ten Rings). The film was written and directed by Chloé Zhao, the Academy Award-winning director of Nomadland. The film focuses on a new team of superheroes known as the Eternals, a race of ancient aliens who have been living on Earth in secret for thousands of years for the purpose of protecting humanity from another race of aliens called Deviants. Following the events of Avengers: Endgame, an unexpected danger again forces them to unite and confront them. The film was released theatrically on November 5, 2021, and to the streaming service Disney+ on January 12, 2022.

The following weapons were used in the film Eternals:

Kingo (Kumail Nanjiani) poses with a suppressed Walther P99 on a poster for his movie Phantom Gun. 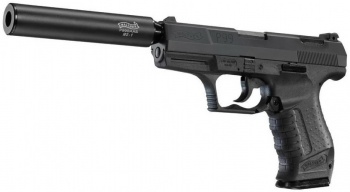 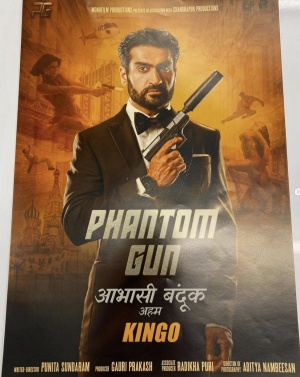 The Phantom Gun poster is second to the right of Kingo, where he holds the gun.

Spanish conquistadors are armed with Matchlock Muskets during the battle for Tenochtitlan. When Druig (Barry Keoghan) takes over their minds, they drop their weapons and leave.

The musket is seen for the first time in the hands of a soldier in the background, while a little girl (Orson Rosenberg) witnesses this massacre.

One of the conquistadors chasing people in the forest shoots.

They line up for another musket volley.

While mind-controlled by Druig, everyone drops their weapons to the ground.

One of the villagers shoots what appears to be a Lee-Speed Sporter at the Deviant.

A woman with a carbine stands in the center in the background during the battle with the Deviants.

One of the Amazon villagers is armed with what appears to be a Mosin Nagant M1891/30 Sniper Rifle with the PE scope.

It was obscured from view by another villager during the fight, so he is only visible when everyone lowers their weapons on Druig's orders.

At least two Amazon villagers shoot what appears to be a Winchester Model 70 at the Deviants during their attack on the village.

Along with the others, the woman fights off the Deviants' attack.

Another man is seen with scoped rifle on right.

He is also seen when the Deviant throws another person.

Due to a continuity error, when Kro impales Ajak (Salma Hayek), her Winchester changes to a Mossberg 500.

When Kro sneakily attacks from behind, the gun changes to a Mossberg.

A resident of Druig's Compound named Diego (Adriá Escudero) is armed with a Mossberg 590 Mariner. He joins the fight along with the other humans when the Deviants attack the village but later lowers his gun on Druig's order.

Shooting Diego can be seen on the right.

Mind-controlled Diego with the Mossberg.

The characteristic safety button is noticeable when he lowers the gun.

Several villagers from Druig's village in the Amazon are armed with Remington 870 shotguns when the Deviants attack the Eternals.

The villager in the background with what appears to be a Remington 870.

Two villagers, marked with a red arrow, fire their guns.

The man in the background on the right is armed with what appears to be a Remington.

The best shot where you can see the Remington 870.

The man with a shotgun is seen in the background.

A villager named Jano (Sebastian Viveros) uses what appears to be a Remington 870 Field Gun.

Druig (Barry Keoghan) picks up the Winchester Model 1300 shotgun of a villager killed by the Deviants from the ground and, jumping on the killer, shoots several times. When the traitor Ikaris throws Ajak (Salma Hayek) onto the ice, where the Deviants have mauled several Alaskans, she picks up the Winchester Model 1300 of one of them and tries to fight back, but the leader of the Deviants Kro attacks from behind and kills the leader of the Eternals.

The Winchester lies on the ground, having been dropped by its former owner before his death.

Druig (Barry Keoghan) with a shotgun jumps on Deviant's back.

He shoots several times in the head in flight.

Ajak grabs the gun loosed by one of the locals, who was killed off-screen by a pack of Deviants...

An Amazon villager shoots Winchester Model 1897 when the Deviants attack the Eternals.

The woman with the shotgun is seen in the center.

She continues to hold the weapon when the shooting stops.