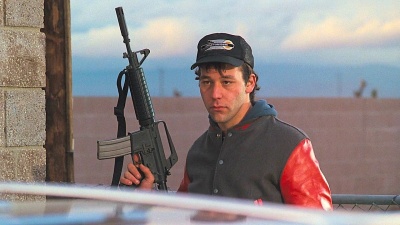 Sam Raimi as a security guard in Spies Like Us.

Sam Raimi is an American director, writer, producer and occasional actor. Along with his older brother Ivan Raimi, younger brother Ted Raimi, Scott Spiegel, Josh Becker, Bruce Campbell and a few other filmmakers including Coen Brothers (collectively sometimes dubbed as "Michigan Mafia"; all of the above-mentioned work frequently with each other) Raimi started to make films in the 1970's moving from amateur 8mm short films to feature films.

Though known as the director of such films as Evil Dead, Darkman, Army of Darkness, and Spider-Man (2002), Sam Raimi has made several appearances in front of the camera in small roles (mostly brief cameos) in movies and television productions. He has also produced several notable films including Timecop, Hard Target, Evil Dead (2013), and Lunatics: A Love Story.

Please visit here for the films in the IMFDB produced and/or directed by Sam Raimi.