Skyfall is the 23rd entry in the official James Bond film series and marked the 50th anniversary of the premiere of Dr. No, the first feature film in the EON-produced series. Daniel Craig returns for the third time as Agent 007, who upon his return from what appeared to be his demise on a previous mission, is given the assignment of tracking down a cyberterrorist who threatens to reveal the identities of deep cover agents. The 2012 film was directed by Sam Mendes, who previously directed Craig in Road to Perdition. The cast includes Javier Bardem, Ralph Fiennes, and Naomie Harris in addition to Judi Dench, returning for her seventh outing in the role of M.

The following weapons were used in the film Skyfall:

James Bond (Daniel Craig) carries the Walther PPK as his sidearm in the film. Field Agent Eve (Naomie Harris) also uses a PPK during the film's opening chase. When Q (Ben Whishaw) issues Bond his new pistol, he refers to it as a "Walther PPK/S, nine-millimeter short" and states that the gun is coded to Bond's palm print so that only he can fire it. This palm print-reading gun is lost in Macau, after which Bond replaces it with a standard PPK. This is later used by M (Judi Dench) in the finale when Silva's men attack Skyfall Lodge. As M fires the PPK at Silva's men, she remembers how bad of a shot she is. 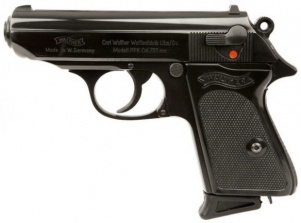 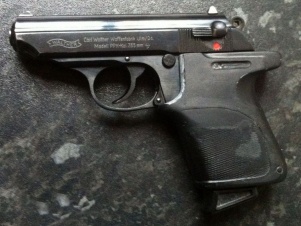 Walther PPK with palm-reading grips from Skyfall. While the dialog identifies the pistol as a PPK/S in 9mm short (.380 ACP), the prop was a standard PPK in .32 ACP fitted with mock-up grips.

First view of Bond with his PPK at the film's beginning.

Bond fires his PPK at Patrice in the market.

Bond reloads his PPK during a shootout.

Bond fires his Walther PPK at Patrice while on the train.

Bond inspects his "Walther PPK/S nine-millimeter short" that is fitted with custom grips.

The special indicator on the pistol flashes green, allowing Bond to fire the gun. This kind of security measure was also seen in the film Licence to Kill. 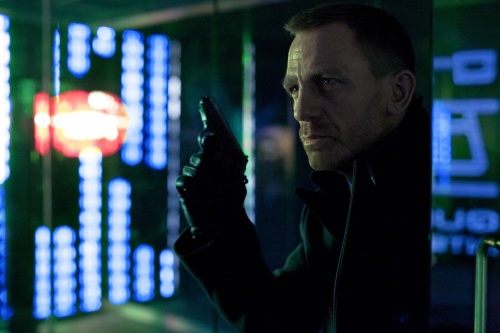 Promotional image of James Bond (Daniel Craig) as he holds the Walther PPK in Shanghai. Note that, unlike in the final film, Bond wears gloves (which would prevent his PPK from firing). Apparently, this mistake was only discovered and corrected after the Shanghai scenes had been shot.

Bond with the PPK while in Shanghai as seen in the film.

The indicator light flashes red on the Walther PPK when someone else tries to use the pistol on Bond.

Bond opens fire with his PPK during a shootout.

Bond with holds a standard PPK while taking cover from an explosion in the tube station. Note Bond's trigger discipline.

Raoul Silva/Tiago Rodriguez (Javier Bardem) and several of his henchmen use Glock 17 pistols during the inquiry board shootout while disguised as police officers. Glock 17 is also the standard sidearm of the SCO19 Firearms Officers and armed police officers at the public inquiry attack. Gareth Mallory (Ralph Fiennes) and Eve (Naomie Harris) also use Glock 17s during the inquiry board attack, picked up from fallen police officers. James Bond (Daniel Craig) also uses a Glock 17 on Silva's island, as do several of Silva's henchmen. Patrice (Ola Rapace) uses suppressed Glock 17 in Shanghai.

Patrice removes the suppressor from his Glock 17 in Shanghai.

However, a non-threaded barrel is shown, which a suppressor wouldn't attach to.

One of Silva's henchmen puts his Glock 17 to Bond's head to dissuade him from using his percussion cap pistol on Silva.

James Bond (Daniel Craig) takes Silva into custody with a Glock 17 after neutralizing his bodyguards.

Silva fires his Glock 17 on the board members during the attack on M's public inquiry.

Gareth Mallory (Ralph Fiennes) fires a Glock 17 that he picked up from a dead police officer and fires at Silva.

Eve (Naomie Harris) fires the Glock 17 that Bond kicked over to her while protecting the board members during Silva's attack.

Patrice (Ola Rapace) uses a Glock 18 when he engages in a shootout with Bond and Eve in Turkey. This handgun is loaded with "depleted uranium" rounds (rather strange, as DU is usually only used in aircraft and tank rounds. A 9mm DU round would offer little armor piercing capability on account of its low velocity and mass). He initially uses the pistol with a 100-round Beta-C drum magazine, but later switches to extended 33-round ones during the train chase. The Glock in question has a completely enclosed slide and not the cutout version of the 18C. 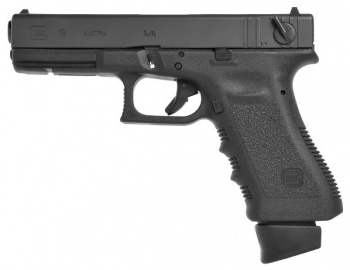 Patrice fires his Glock 18, loaded initially with a 100-round Beta-C drum magazine.

Patrice fires the Glock, now loaded with an extended 33-round magazine.

Note the completely enclosed slide, confirming that this is a Glock 18, and not the 18C variant with slide cutouts.

During a confrontation with James Bond (Daniel Craig) on the island, Former Station H agent Raoul Silva (Javier Bardem) is seen taking out a one of his reproduction Percussion Cap Ardesa 1871 Dueling Pistols and challenges Bond to knock a shot glass off a person's head with it. Silva also is seen holding the pistol.

During a confrontation with Bond on the island, Silva is seen taking out one of his reproduction Percussion Cap Ardesa 1871 Dueling Pistols.

Bond is challenged to fire the pistol.

Silva holds the pistol while Bond looks on at gunpoint.

Silva holds his Steyr on Bond during the climax.

Silva hands his Steyr to M.

A Tokarev TT-33 pistol appears to be the one used to execute an undercover MI6 agent.

M watches a BBC broadcast of the MI6 agent being executed.

One of Silva's henchmen is armed with an MP7A1. 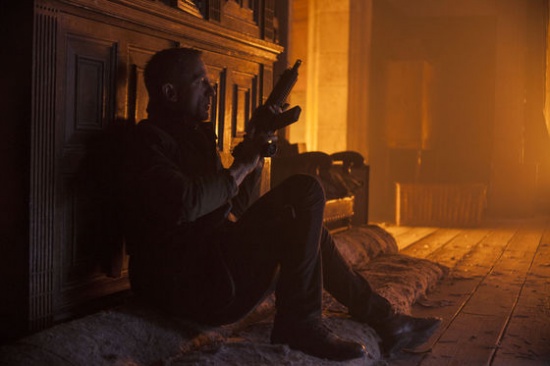 "You dropped something." Bond holds an HK416 after killing one of Silva's men.

One of the henchmen searches for M, with his 416 at the ready.

Silouette of Bond with a fresh HK416.

Bond holds the HK416, as he watches the fire. Note how the front sight is damaged, likely from on-set abuse.

A good close-up of an HK416 in the hands of one of Silva's henchmen (Jens Hultén), moments before Bond grabs the rifle. 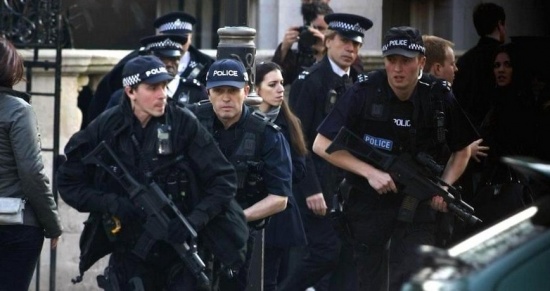 An SCO19 officer from the Metropolitan Police Service is seen holding a Heckler & Koch G36C rifle while patrolling Embankment station.

Eve (Naomie Harris) uses an Olympic Arms K23B Tactical with a FAB defense "GL-Shock" stock, a smooth match-styled handguard, and a red dot sight during the train chase sequence in Turkey. If you look close enough, you can see the birdcage flash hider is up side down. 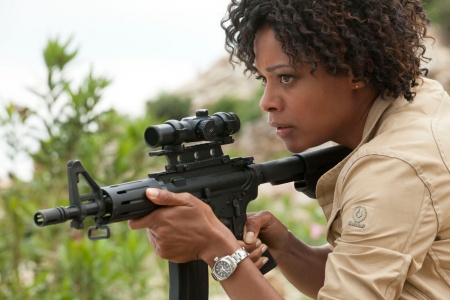 Production image of Agent Eve with a Olympic Arms K23B.

Closeup of Eve with the rifle. 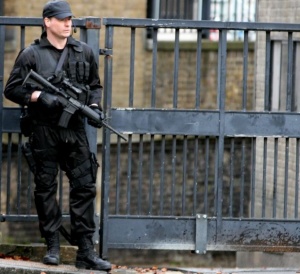 An MI6 Security Officer stands guard outside the entrance to the underground headquarters.

Patrice (Ola Rapace) uses a custom bolt action suppressed sniper rifle when assassinating a target in Shanghai. Patrice can be seen working the bolt, but during a fight, the rifle appears to be fired semi-automatically.

A magazine is loaded.

The sight is flipped and the bolt action is seen.

Closeup of the rifle's bolt action.

The block suppressor is seen.

Despite the bolt action, the rifle appears to be seen firing semi-automatically during a fight. The gunfire and muzzle flash (despite being suppressed) are mostly likely post-production effects.

During the assault on Skyfall Lodge, James Bond (Daniel Craig) uses his deceased father's Anderson Wheeler Double Rifle chambered in .500 Nitro Express. Anderson Wheeler is a London-based maker of luxury rifles and shotguns whose custom made double rifles are also available in calibers from .375 to .600. Bond's depiction of recoil is akin to that of a nail gun, despite the mammoth cartridge. Bond casually discards it when it runs out of ammunition.

The Double Rifle is seen on the right.

The plate with the initials of Bond's father is seen on the rifle.

Bond ejects the shells from the Double Rifle.

Bond holds his father's Double Rifle, as he and M engage in a conversation.

Kincade (Albert Finney), gamekeeper of the Skyfall Estate, carries a 12 Gauge Double Barreled Shotgun. In preparation for impending the attack on Skyfall Lodge, he saws down the barrel to achieve better close-quarters usability.

In preparation for the impending attack on Skyfall Lodge, he saws down the barrel to achieve better close-quarters usability.

Kincade blows a round through the door with his newly sawed-off shotgun.

Kincade holds the shotgun as he looks through the window of the Skyfall Lodge.

"Welcome to Scotland!" Kincade fires the shotgun at Silva's henchmen.

Bond utilizes machine guns mounted underneath the lights of his customized DB5 when Silva's men attempt to storm Skyfall Lodge. The machine guns are a homage to the earlier Bond film Goldfinger, where the Aston Martin driven by Bond had the same armaments.

Bond utilizes machine guns mounted underneath the lights of his customized DB5 when Silva's men attempt to storm Skyfall Lodge. While Bond was seen winning a DB5 in Casino Royale (2006), the vehicle seen here isn't the same one (The Casino Royale DB5 was left-hand drive, while this one is right-hand drive). This DB5's machine guns and other gadgets are more reminiscent of the car seen in Goldfinger, where the MI6-issued Aston Martin driven by Bond had the same armaments. The license plate as well reads BMT 216A, another reference to Goldfinger. 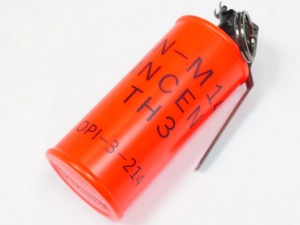 The gunbarrel sequence again is seen at the film's end.

A new gunbarrel sequence is seen at the film's end.