On Her Majesty's Secret Service

On Her Majesty's Secret Service is the 6th installment in the official James Bond film series. The 1969 sequel marked the only appearance of George Lazenby as James Bond, who rescues a woman from drowning and discovers that she is a link to a European crime syndicate that may be able to help him locate his nemesis, Ernst Stavro Blofeld. The film was directed by Peter Hunt (who had been the film editor of first four Bond films) and the cast featured Diana Rigg and Telly Savalas in addition to Bond regulars Desmond Llewelyn, Bernard Lee and Lois Maxwell.

The following weapons were used in the film On Her Majesty's Secret Service:

James Bond (George Lazenby) carries his usual Walther PPK. One thug that captures Bond has a PPK as well. Tracy (Diana Rigg), takes Bond's PPK out of his holster and points it at him, but Bond disarms her of it by squeezing her wrist.

Tracy points Bond's PPK at him when he enters the hotel room.

Tracy (Diana Rigg) holds the PPK before Bond disarm her.

Kleff (Bill Morgan) points Bond's own PPK at him.

Bond fires his PPK at Blofeld during the bobsled chase.

The PPK is shot out of Bond's hand. Note how in this picture the safety catch of Bond's PPK is on even though he fired a few shots at Blofeld before he loses it. Also notice the unlikely trajectory of Blofeld's ricochet - skipping up off of the front of the bobsled and then cutting across the top of Bond's hand, despite totally avoiding his thumb which is in the way.

The thug at the beginning of the film pulls a SIG P210 on Bond. Some of Blofeld's men on Piz Gloria also carry P210s.

A hitman puts his pistol to Bond's head.

The hitman prepares to shoot Bond.

A henchman searches the cowbell shack for Bond with his P210 drawn.

Felsen (Leslie Crawford) fires a SIG during the car chase.

Braun (George Lane Cooper) fires a P210 from the passenger seat of the Mercedes.

Marc-Ange Draco (Gabriele Ferzetti) and some of his men carry what appear to be the Colt Official Police during the mountain raid.

One of his Draco's men holds the revolver.

On the right, Draco (Gabriele Ferzetti) holds the revolver.

The SPECTRE guards at Piz Gloria use SIG SG 510 battle rifles. During the Ski chase sequences, as the close-ups of the henchmen were shot in front of a rear-projection screen, they are mock-ups.

Two guards with their SIGs at Piz Gloria.

One of Blofeld's men takes aim with his SIG SG 510.

A henchman fires his SIG SG 510. During the ski chase scenes, the weapons do not appear to be firing blanks, but using some kind of faked muzzle flare effects. Also note the absence of the "beer-keg" charging handle, and that the rear front and rear sights look like they're molded onto the gun.

Two skier jump with their rifles during a ski chase.

A skier advances towards Bond while holding his rifle.

One of Blofeld's men (George Leech) skies with his SIG.

One of Blofeld's men fires a SIG SG 510 at Bond while on skis.

Another SPECTRE operative (Bernhard Russi) holds his rifle while he loses control.

A guard drops his SIG when gunned down. 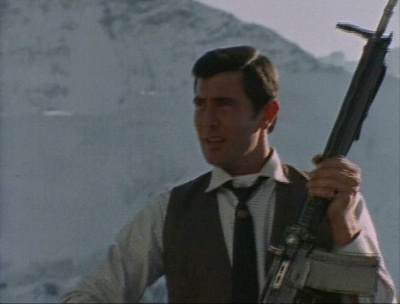 George Lazenby plays with a SIG SG 510 while on the set in Switzerland.

Irma Bunt (Ilse Steppat) uses what appears to be an M16A1 at the end of the film during a drive-by. It is also fitted with a custom muzzle brake, very reminiscented the Cutts compensator from the Colt R80 Monitor.

Irma with the rifle. As with the earlier ski sequences, the weapon appears to use some kind of faked muzzle flash effect in this scene, rather than real blanks. Judging by the position of Steppat's right hand, she is also not holding the rifle by the pistol grip but around the stock, which would make pulling the trigger impossible.

At the film's beginning, Bond reaches into his glove compartment, which contains what appears to be a wooden rifle stock, a suppressor, and a scope. It has been surmised that the rifle seen here is an AR-7 similar to the one seen in From Russia with Love.

At the film's beginning, Bond reaches into his glove compartment, which contains what appears to be a rifle stock, a suppressor, and a scope.

Bond (George Lazenby) and Marc Ange Draco's men use the Sterling L2A3 during the raid on Piz Gloria in the finale.

Bond's Sterling is silhouetted as they fly towards Piz Gloria.

One of Draco's men fires his Sterling from the helicopter.

Another man fires from the helicopter.

Irma Bunt (Ilse Steppat) uses a silenced SMG when shooting at the telephone box from the rear window of the black Mercedes.