No Time to Die

No Time to Die is the 25th entry in the official James Bond film series and Daniel Craig returns for his fifth and final time as Agent 007. True Detective director Cary Joji Fukunaga makes his Bond directorial debut and the cast for the 2021 sequel includes Rami Malek and Lashana Lynch in addition to returning cast members from the series Jeffrey Wright, Léa Seydoux, Christoph Waltz, Naomie Harris, and Ralph Fiennes. The film was scheduled to be released in 2020, but was delayed until April 2, 2021.

The following weapons were used in the film No Time to Die:

James Bond (Daniel Craig) once again carries the Walther PPK as his sidearm of choice in the film.

A production image of Daniel Craig as Bond wielding the PPK.

James Bond (Daniel Craig) appears to opt for a SIG-Sauer P226 as his secondary to his carbine during the assault on the lair, which is very fitting for his background in the Special Boat Service and MI6. He carries it in a thigh holster, based on what's seen in released behind the scenes photos.

Interestingly, early promotional posters show James Bond carrying the PPK while wearing an empty P226 holster. Later promotional posters released following the announcement of the movie's release delay to November shows a modified version of the same poster, in which James Bond carries a P226 instead of a PPK, making his gun actually fit his gear. 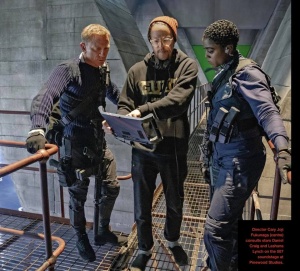 A SIG-Sauer P226 is holstered in his thigh holster as seen in BTS photo. 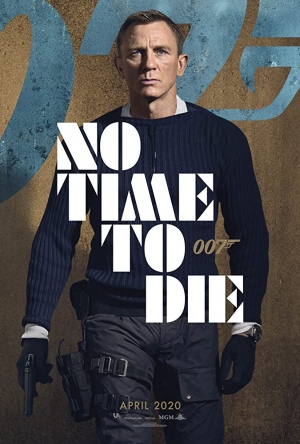 The early version of James Bond's character poster for No Time to Die. Note that he is holding a Walther PPK. 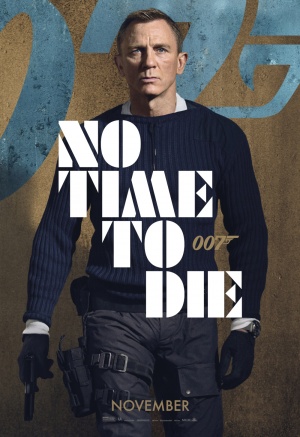 The later version of James Bond's character poster for No Time to Die. Note that his gun has been changed to a SIG Sauer P226R.

James Bond (Daniel Craig) keeps a Browning Hi-Power with him in his Jamaica's residence when he enjoys his life outside active service. Bond using the Browning Hi-Power is also a nod to his SBS background and to Casino Royale's Nambutu Embassy sequence where he disarmed the ambassador and used the gun for the majority of the firefight (mostly shooting at pipes to incapacitate soldiers or at the ceiling to scare the crowd). 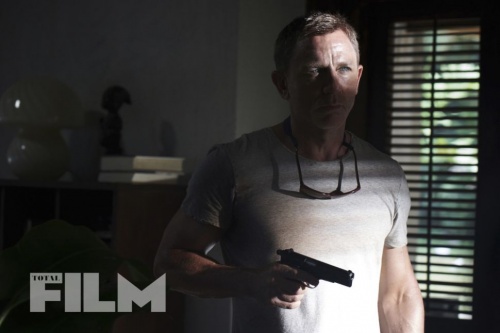 Gunmen assaulting a building appear to be armed with AKS-74U rifles. Bond also uses the rifle.

Gunmen rappel down a building while armed with what seems to be AKS-74U rifles.

A CSA Sa vz. 58 Compact appears to be used by Saffin (Rami Malek).

Saffin (Rami Malek) uses what appears to be a CSA Sa vz. 58 Compact.

Bond is seen using a Mk 18 Mod 0 fitted with an EOTech sight and suppressor.

Bond is seen using a Beretta ARX-160 A3 fitted with a Beretta GLX-160 A1 grenade launcher.

The Minigun-styled guns protrude from the Aston Martin's headlights, ready to fire.