You Only Live Twice

You Only Live Twice is the fifth entry in the official James Bond film franchise. The 1967 sequel finds Agent 007 (Sean Connery) faking his own death and traveling undercover to Japan to investigate the disappearance of Soviet and US space capsules.

The following guns were used in the film You Only Live Twice:

James Bond (Sean Connery) carries a Walther PPK as his standard sidearm once again. Mr. Osato (Teru Shimada) later proudly identifies the weapon to Blofeld as a "Walther PPK", leading Blofeld to deduce Bond's true identity as he was apparently the only person SPECTRE was aware of that carried a PPK.

Bond draws his PPK during a fight with one of Osato's men.

Bond fires his PPK at an Osato security guard.

Osato sees Bond's PPK through an X-ray capability on his desk.

Ernst Stavro Blofeld (Donald Pleasence) is seen holding a Webley Mk IV, which Hans (Ronald Rich), one of his henchmen, had handed him in the volcano lair. Blofeld is seen dropping the pistol when Tiger throws a star into his arm. Bond (Sean Connery) picks it up and uses it during the assault on the volcano lair. Kissy (Mie Hama) also briefly uses one to kill one of Blofeld's guards that takes away Tiger's gun. The British policemen (Brian Wilde and Anthony Ainley) in Hong Kong who check Bond's "murder" also carry Webleys.

One of Blofeld's guards threatens Bond with his Webley as Blofeld talks to him.

Kissy (Mie Hama) fires the Webley at a SPECTRE henchman.

A throwing star causes Blofeld to drop his Webley, which subsequently fires.

Bond holds the Webley. In some scenes, the revolver appears to be a Colt New Service.

In a continuity goof, Blofeld's Webley turns into a different revolver when dropped to the ground. This appears to be a Colt New Service revolver, chambered in either .455 Webley or .45LC, judging by the straight-cut barrel and by the familiar "COLT" engraved grips. The Colt revolver also appears to be used by Osato's guards during a shootout with Bond.

Bond picks up Blofeld's "Webley", which now appears to be a Colt New Service.

Bond holds the revolver, which now appears to be a Colt New Service.

This also appears to be the revolver used by Osato's guard during a shootout with Bond.

James Bond (Sean Connery), while in disguise as a Japanese fisherman, uses an early Colt Detective Special to kill an assassin. Tanaka also appears to hold the revolver as he enters Bond's room.

Bond uses his Detective Special to kill a Japanese assassin.

Tanaka also appears to hold the revolver as he enters Bond's room.

When Bond (Sean Connery) fires at Osato's dockworkers in Kobe, his PPK is switched to what appears to be a Colt Model 1903 Pocket Hammerless due to a continuity error.

Bond fires at Osato's dockworkers. (The PPK seems to have been replaced for this shot by a Colt 1903).

Bond with the Colt 1903 after sending Aki to get assistance from Tanaka.

When Bond visits the Osato headquarters for the first time, he observes a remote-operated pistol mounted in the ceiling. The pistol seen here appears to be a Mauser C96 mounted upside down.

When Bond visits the Osato headquarters for the first time, he observes a remote-operated pistol mounted in the ceiling.

The pistol seen here appears to be a Mauser C96 mounted upside down. 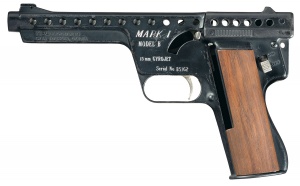 The Gyrojet pistols and rifles on Tanaka's table.

A gold-plated Gyrojet pistol is seen on the right along with the rocket-propelled rounds.

Tanaka fires a Gyrojet pistol. The effect of the "rocket-propelled" round is seen.

Tanaka with his Gyrojet pistol when leading the raid on Blofeld's volcano lair.

Tanaka with his Gyrojet during the raid. 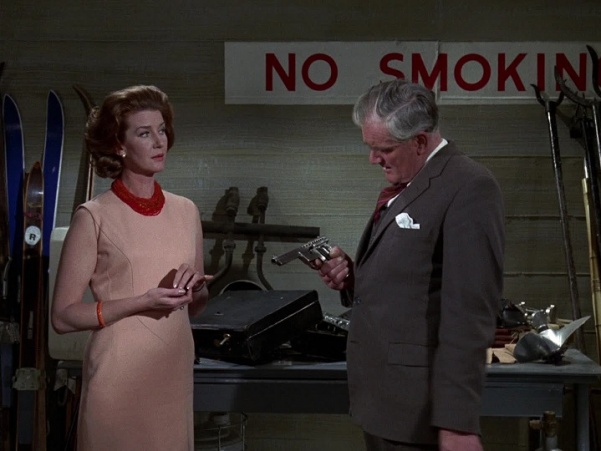 Q (Desmond Llewelyn) holds a Gyrojet during the TV-movie "Welcome to Japan, Mr. Bond", which was made to promote the actual movie.

A Sterling L2A3 is used by Chinese hitmen during Bond's "murder" in Hong Kong during the pre-credits sequence. They are also used by Tiger's Ninjas and SPECTRE guards during the final battle.

Bond's bed is shot up by two assassins armed with Sterlings in Hong Kong.

Five Sterlings can be seen at the entrance to Blofeld's office.

A ninja enters the crater with his Sterling first.

A ninja drops into the crater with a Sterling on his back.

At least one ninja is seen carrying a Sten Mk.III.

A ninja carrying a Sten Mk.III is killed. Note the straight magazine

An assassin trying to kill Bond in Tokyo carries a Thompson M1928A1 with a 30-round magazine. Upon closer inspection, the Thompson appears to be a mockup that emits simulated muzzle flashes. One is also carried by one of Osato's henchmen on the Kobe docks, dropped when Bond shoots him with the Colt 1903. Thompsons also appear to be carried by some of Tanaka's ninjas during the assault on the volcano.

The assassin prepares to fire his Thompson at Bond.

An assassin aims his Thompson at Bond.

The Thompson is fired. The bolt doesn't move when the weapon is fired, a strong indication that this a prop weapon with simulated muzzle flash.

The assassin fires a Thompson at Bond's car as they speed through Tokyo.

A ninja runs with his Thompson (on the left).

The ninja in the center holds his Thompson .

The ninja on the left prepares to enter the volcano lair with his Thompson in his hands.

Some of Tiger's ninjas carry the Star Z45 SMG during the assault in the volcano crater. (These scenes were filmed in Spain, explaining the Star's presence. Once the action shifts to the volcano interior, these SMGs are not seen again.)

A ninja is shot with his Star still in is hands.

Another ninja with his Star Z-45.

The henchmen in red to the right is firing the Mk V (note the forward hooded sight), the remainder are using other variants.

Some of the SPECTRE guards in the volcano use MP40s. Tiger Tanaka (Tetsuro Tamba) picks one up and fires it after Bond kills the guard using it.

The MP40 guns are on the right.

Bond and Tanaka run past the guns.

Two guns can be seen next to a Ninja.

A ninja is briefly seen in the crater-scene with what appears to be a French MAT-49. (These scenes were filmed in Spain, explaining the SMG's presence. Once the action shifts to the volcano interior, these SMGs are not seen again.)

The ninja to the extreme far right is seen with what is possibly a French MAT-49.

A Sturmgewehr 44 can be seen in the Ninja training facility.

The StG 44 is marked with a red circle.

A Royal Navy honor guard uses the Lee-Enfield No. 4 Mk. I during Bond's Hong Kong "funeral".

The British Royal Navy fires Lee-Enfield No. 4s to honor Bond at his "funeral".

At the top, three Gyrojet rifles on Tanaka's table.

At the bottom, the carbine rifles on Tanaka's table.

One of Tiger's ninjas aims a Gyrojet carbine. 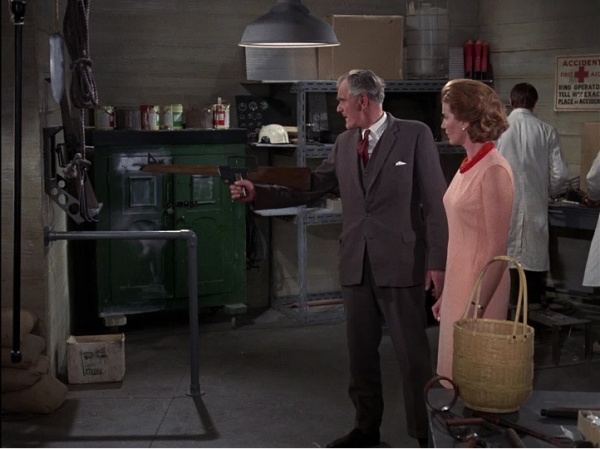 Several of Tiger's ninjas and some of the SPECTRE guards fire M1 Carbines during the infiltration.

A SPECTRE guard aims at one of Tiger's ninjas.

A henchman in a yellow uniform fires an M1 Carbine.

One of Blofeld's men uses his rifle against a ninja.

The ninja behind Kissy holds his rifle.

A ninja is seen with what appears to be a stockless M1 Carbine. Due to a lack of screen time it's difficult to identify the exact model.

One of Blofeld's guards uses a Lee-Enfield No. 5 Jungle Carbine rifle in a shootout with Bond when he tries to get into the launch control room.

One of Blofeld's guards fires his Lee-Enfield No. 5 at Bond. The guard fires two rounds in extremely rapid succession indicating a bit of hollywood license is at work as the gun is a bolt-action.

What appear to be Browning M2 Aircraft machine guns are mounted in defensive positions outside Blofeld's volcano in order to keep away invaders. Blofeld orders these to be fired when Tiger's men infiltrate it. All of Blofeld's Bell 47-G helicopters also appear to be armed with these guns. Upon closer inspection, these machine guns appear to be mockups that emit simulated muzzle flashes

These guns fire at the ninjas. Upon closer inspection, these machine guns appear to be mockups that emit simulated muzzle flashes

One of the Blofeld's helicopters fires it's two M2's at Bond.

Along with the Browning M2 machine guns, there is also a mortar inside the crater.

The mortar fires at the ninjas.

While with Tanaka in Japan, Bond (Sean Connery) requests "Little Nellie" from Q (Desmond Llewelyn). "Little Nellie" is a mini-autogyro with twin machine guns, rocket launchers, and a host of other defensive gadgets. Bond uses her to great effect, destroying four helicopters of assassins sent after him. "Little Nellie" was based on the real life "Wallis WA-116 Agile" autogyro; A fully flyable aircraft, (though not armed), a design by the British former Royal Air Force Wing Commander Ken Wallis.

Q shows Bond Little Nellie's machine guns. From another angle it's revealed that the MG's are mockups as they lack the receiver which should portrude into the cockpit.