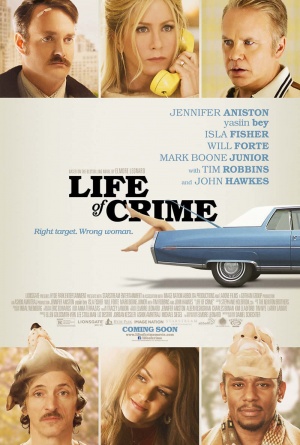 Life of Crime is a 2013 comedy crime film that focuses on two small time criminals who decide to kidnap the wife of a wealthy businessman, not knowing that the businessman was getting ready to divorce her. The film is an adaptation of the 1978 Elmore Leonard novel The Switch and the characters of Ordell and Louis were later featured in Leonard's 1992 novel Rum Punch, which was already adapted into Quentin Tarantino's 1997 film Jackie Brown.

The following weapons were used in the film Life of Crime:

The Colt M1911A1 is the pistol carried by Ordell Robbie (Yasiin Bey) during the kidnapping.

Pre-war Colt M1911A1 pistol - commercial model known as the "Colt Government Model" - .45 ACP. This has a deep Colt factory blued finish, common for commercial variants before and after the war.

The Colt M1911A1 is carried by a masked Ordell Robbie (Yasiin Bey).

The pistol is held by Ordell.

A Walther P38 is seen in the hands of Richard (Mark Boone Junior) while showing off his collection. He states that a lot of people mistake this pistol for the Luger P08. This pistol is used by Richard when a car pulls away from his house.

The unloaded Walther P38 is seen in the middle.

A Walther P38 is seen in the hand of Richard (Mark Boone Junior).

A Walther PPK is also a weapon in Richard's collection.

The PPK is seen.

Louis Gara (John Hawkes) can be seen with a Smith & Wesson Model 10 during the kidnapping. This revolver is also in Richard's collection and similar revolvers were used by Detroit police.

Louis Gara (John Hawkes) can be seen with a Smith & Wesson Model 10.

A Colt Detective Special is the revolver carried by Ray (Kevin Corrigan). 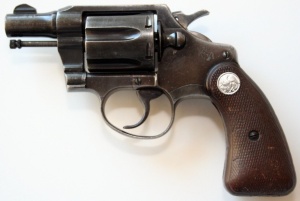 A Colt Detective Special is drawn by Ray (Kevin Corrigan).

An M1 Garand is one of the weapons in the collection of Richard (Mark Boone Junior). The rifle is later used in a shootout with police.

The M1 Garand in the center.

The M1 Carbine is another one of the weapons in the collection of Richard (Mark Boone Junior).

World War II Era M1 Carbine with dark walnut stock, 'L' peep sight and no bayonet lug - correct for most of WWII, shown with khaki sling and oiler and a period magazine pouch for buttstock - .30 Carbine

The M1 Carbine is seen on the left.

A Karabiner 98k is on display in the collection owned by Richard.

The Karabiner 98k on the upper left.

What appears to be an AKM is also on display in the collection owned by Richard.

The AKM on the left.

The AKM on the left.

What appears to be a Berdan model Sharps Rifle is also on display in the collection owned by Richard.

The Berdan Sharps 1859 is seen on the very top.

The Kentucky Flintlock Rifle is also shown by Richard.

The Kentucky Flintlock rifle on the right.

Richard also holds what resembles a Coach-style double barreled shotgun. He refers to the shotgun as a "Winchester Mercury".

The MP40 is seen on the wall in Richard's house.

The MP40 on the upper right on the wall.

The PPSh-41 with a drum magazine on the bottom left.
Retrieved from "http://www.imfdb.org/index.php?title=Life_of_Crime&oldid=1254236"
Categories: