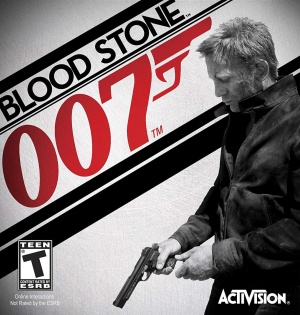 Blood Stone is the 2010 Video Game that marks the return of Daniel Craig as James Bond 007. The game also marks a difference from previous James Bond games by having realistic digital images and voice acting by the stars of the movie, namely Craig and Judi Dench. There is a large cache of weapons to choose from for basic firefights to hand to hand combat. In the story, James Bond is sent to investigate the disappearance of a researcher named Malcolm Tedworth, whose kidnapper has been revealed to be working for a man named Stefan Pomerov. It's up to Bond to save the world once again.

The following weapons are used in the video game Blood Stone:

In this adventure, James Bond uses a 1st generation Walther P99, typically with a suppressor, as his main sidearm. For some reason it only holds 8 rounds, half the real-world capacity of the 9x19mm version. 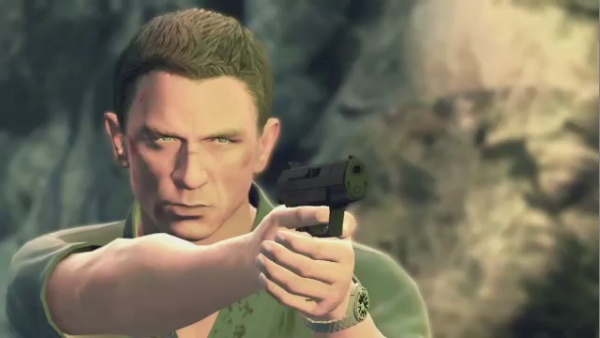 James Bond with his Walther P99.

The Walther PPK is used by some of the guards and can be also be used by Bond. 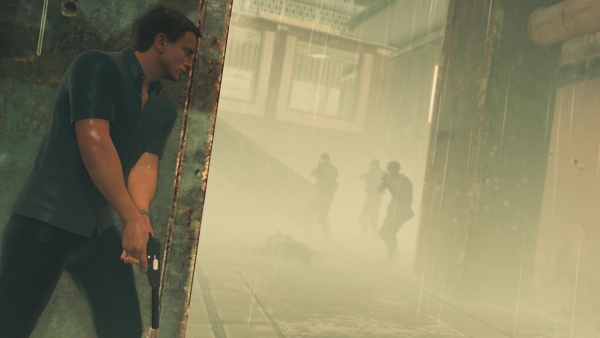 A Beretta 92FS Inox with a black barrel and front slide serrations on the right side of the slide only is the one of the main sidearm of the opponents in the game. Referred to as the M9. Holds an incorrect 12 rounds, the capacity of the .40 S&W Beretta 96.

Bond punches the Beretta off the opponent's hand. Note the forward slide serrations. 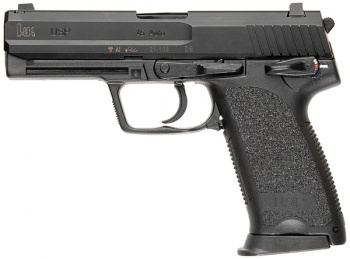 Bond disarms an enemy of his USP during a fight. Note that the front end is longer than normal, but it's not a USP Expert due to the frame being the same length as the slide.

Bond holds a 50 Years Special Edition SIG P210 on the cover, which is based on a Quantum of Solace production still. It does not appear in game. 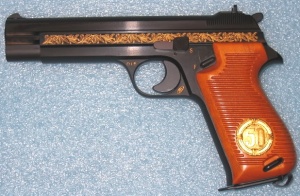 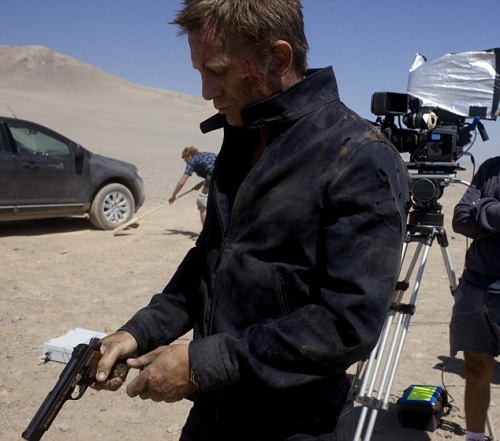 This production still from Quantum of Solace the cover is based on.

A Heckler & Koch MP7A1 with attached sound suppressor, C-More sight, and a(n incorrect) 26-round magazine. Used by guards in the Istanbul and Monaco levels and by mercenaries in Bangkok level.

Bond disarms an opponent armed with an MP7 in Monaco.

Bond disarms another opponent of his MP7 in Istanbul.

Bond disarms a third opponent of an MP7 in Bangkok.

By their powers combined, Bond now has his own MP7.

A fourth enemy trying to shoot Bond with another MP7.

A Heckler & Koch UMP45 with an attached vertical foregrip and unrealistic 40-round magazine capacity.

Bond throws a UMP45-armed soldier off a bridge.

The HK53A3 is used by enemies throughout every level except Monaco. Although it is referred to as an MP5 in the game, it seems to be a hybrid of the HK53A3 with some features of the MP5A3: the casings it ejects are 5.56mm casings and the magazine's width is from the 5.56 magazine, but the mag's length (not height) is from the 9mm, and the HK53-style flash hider is detached.

In this image, you can clearly see the rifle casings fly.

Notice the magazine, which is clearly bigger than that of the MP5.

Bond disarms an enemy of his HK53.

Bond taking cover with his HK53.

An AK-74M with attached EOTech sight. Used by Russian soldiers in the Istanbul and Siberia levels, by mercenaries in Bangkok and Burma levels. Holds 32 rounds per magazine.

Bond shoots guards with an AK-74M.

Referred to as the "Combat A.R". The FN SCAR has a black finish and is seen for the first time in the Burma level. Holds 40 rounds even though it's clearly a 30-round magazine. 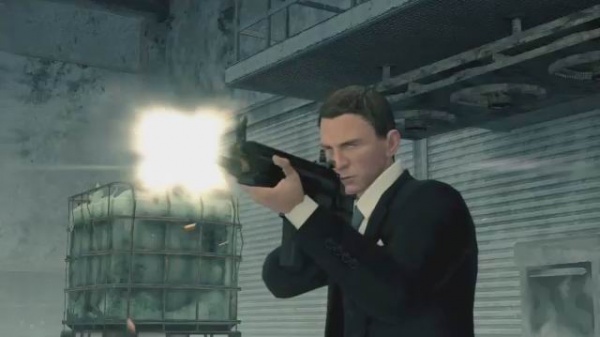 Bond fires a SCAR-L at enemies.

A Heckler & Koch G36C with attached vertical foregrip. First seen in the Monaco level. Incorrectly has a capacity of 24 rounds and shoots in 3-round bursts. 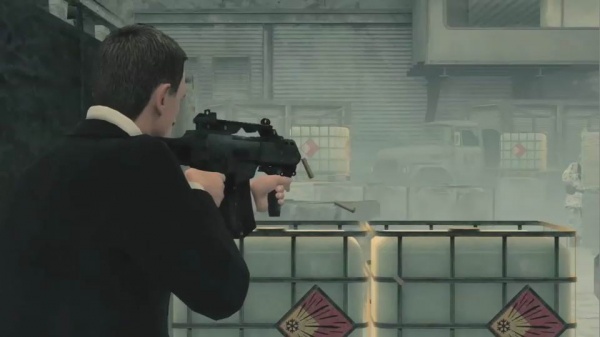 Bond firing a G36C at Russian soldiers in Siberia.

A Barrett M107CQ is used by an assassin that kills Colonel Ping in the Bangkok level. 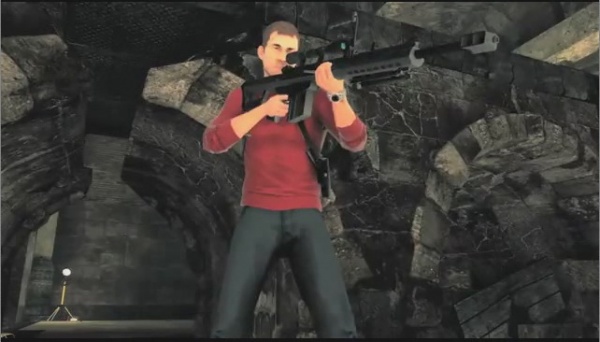 A mercenary with a Barrett M107CQ.

A DSR-1 is found in the Siberia, Bangkok, and Burma levels. Has the very unrealistic ability to fire in 3-round bursts even though it's a bolt-action rifle, and has a very incorrect capacity of 30 rounds instead of 5. It seems the developers have somehow mistaken this for some sort of assault rifle.

The M24 is found in the Burma level. With folded bipod and camo paint. Incorrectly holds 9 rounds.

The first is referred to as the M1 which holds an incorrect 12 shells. Used by mercenaries in the Burma levels. The second one is the Benelli M3T which holds (an almost correct) 8 shells. First seen in the Siberia level.

An enemy drops his Benelli M3 shotgun after Bond shoots him.

Bond prepares to shoot more guards with a Benelli M3T.

The Serbu Super Shorty shotgun is rarely seen in the game, only being available on a couple of missions. Incorrectly fires semi-automatically.

A mercenary with a Serbu Super Shorty shotgun

The GM-94 grenade launcher is used by mercenaries in the Istanbul and Burma levels. 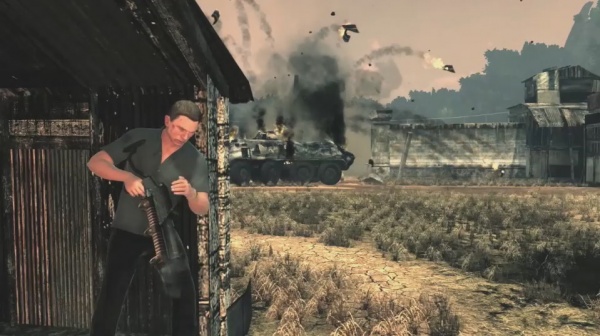 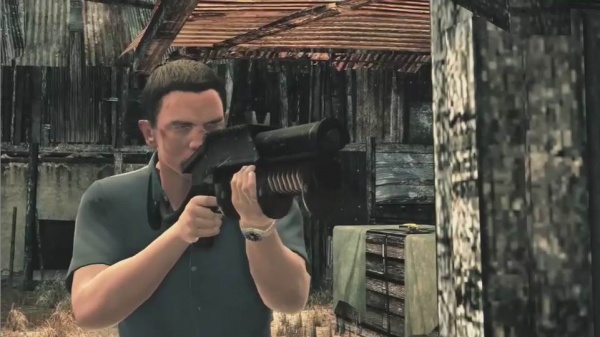 The reveal trailer shows Greco firing a FGM-148 Javelin at Bond. In the actual game, this occurs during the final cutscene of the prologue mission.

Greco fires the Javelin at Bond.

In the Bangkok levels, Bangkok Police use what appears to be a X26 taser, and is known as a 'Stun Gun' in-game.

Bond using a X26 from a taken-down policeman.