Rambo: Last Blood is the fifth and perhaps final installment in the John Rambo film saga. Sylvester Stallone returns as John Rambo, the former Green Beret and Vietnam War veteran now retired and living on his father's ranch who travels to Mexico to locate his housekeeper's granddaughter who has gone missing and then finds himself confronting a brutal drug cartel. The sequel, which was directed by Adrian Grunberg, was released to theaters in the US on September 20, 2019.

The following weapons were used in the film Rambo: Last Blood:

The Heckler & Koch USP pistol seen at the right.

An ornate nickel-plated M1911-style pistol with custom grips is taken up by Hugo Martinez (Sergio Peris-Mencheta). A regular M1911 is seen in the hand of a cartel soldato confronting Rambo. 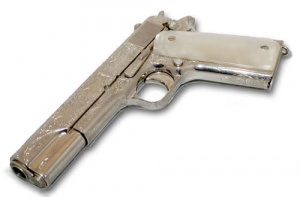 M1911-style pistol in the foreground.

Several SIG-Sauer P226 pistols seen at the near left and right.

A Colt Model 933 carbine is seen used by a several cartel soldados.

The AKS-74U seen in the foreground.

The M4A1 at the right is carried by Hugo Martinez (Sergio Peris-Mencheta).

The M4A1 is used by Martinez while in the tunnels.

Hugo Martinez (Sergio Peris-Mencheta) carries the M4A1 while trying to escape from a booby trap.

Rambo uses an M16A2 rifle fitted with A1 triangular handguards when confronting the cartel soldados in his tunnels.

Rambo uses an M16A2 rifle (the adjustable rear sight is a dead giveaway that it's not an A1).

M16A1s are seen in archival footage when Rambo flashes back to the Vietnam War in the beginning of the film.

During the climactic confrontation between Rambo (Sylvester Stallone) and the Cartel soldiers Rambo uses a classic Winchester 1892 Saddle Ring Carbine. 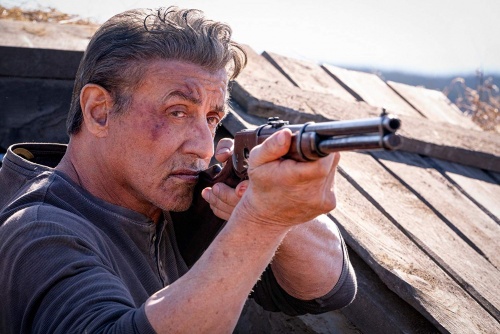 Some soldados carry Norinco Type 56-1 rifles while confronting Rambo. One has a chromed engraved barrel, while another one is gold-plated.

The second soldado with his Type 56-1.

Sawed off side by side shotgun

A Sawed off side by side shotgun is used by Rambo to take down cartel soldados in the tunnels.