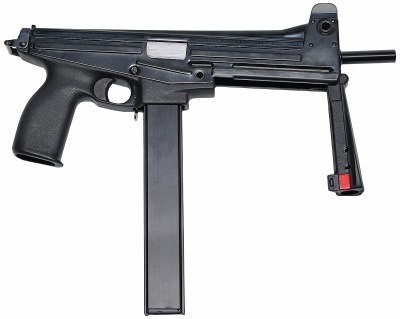 Jatimatic with 40-round magazine - 9x19mm

Jatimatic with 20-round magazine - 9x19mm

The Finnish Jatimatic submachine gun was designed by a Finn called Jali Timari in the late 1970s and early 1980s and produced in very limited numbers (approx. 400) by Tampereen Asepaja Oy (TAO) between 1983-1986. It would be later re-introduced (unsuccessfully) by Oy Golden Gun Ltd as the "GG-95 PDW" in 1995, one of the first weapons to be marketed under the 'PDW' label. The firearm was designed primarily for police, security forces and armored vehicle crews and was one of the first noted weapons to use a diverted recoil system prior to the TDI Vector. It was never adopted into service by the Finnish Defence Forces, although the later GG-95 PDW version was tested by the FDF in the 1990s; the conclusion of the tests was that the GG-95 was not suitable as a service weapon.

Surprisingly, there were no Jatimatics in movie armories in the United States. All appearances of the Jatimatic (in U.S. films) were specially coordinated by TAO and Jatimatic's American distributor to showcase the weapon, and all variants were used and then returned to TAO after the end of filming.

The Jatimatic and variants can be seen in the following films, television series, video games, and anime used by the following actors: