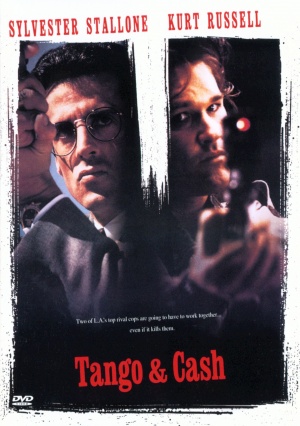 Tango & Cash is a 1989 action film starring Sylvester Stallone and Kurt Russell as mismatched LAPD narcotics detectives who reluctantly join forces to catch the individuals behind who set them up to take the fall for the murder of a federal agent.

The following weapons were used in the film Tango & Cash:

The Smith & Wesson Model 36 is the revolver carried by LAPD Detective Ray Tango (Sylvester Stallone). In an homage to Jackie Chan's Police Story, he uses it in the opening sequence when facing down an approaching big rig that is transporting cocaine. He appears to be able to hit the windshield, and make a tight group, from a long distance, despite the poor sights on the gun. Tango also is seen taking the Model 36 from Federal Agent Wyler (Lewis Arquette) during a confrontation. Tango later gives Cash his revolver during the quarry chase.

Tango spins the cylinder before shutting it.

Tango aims his 36. It is clearly loaded with blanks since the bullet heads aren't visible in the front of the chambers. This sequence appears to be inspired scene-for-scene from a sequence in Jackie Chan's Police Story (1985).

Tango continues to fire his S&W 36.

Tango draws his S&W 36 as he senses that someone is behind the wall.

Tango also is seen taking the Model 36 from Federal Agent Wyler (Lewis Arquette) during a confrontation.

Det. Gabriel Cash (Kurt Russell) holds the S&W given to him by Tango.

Tango also is seen pulling what appears to be a Smith & Wesson Model 60 from an ankle holster later in the film.

Tango also is seen pulling what appears to be a Smith & Wesson Model 60 from an ankle holster later in the film.

The agent on the left holds the revolver.

The revolver on the left.

Tango & Cash are confronted by federal agents, one of them brandishing a S&W Model 15 (on the far right).

Other FBI agents who confront Tango and Cash are armed with Smith & Wesson Model 10 revolvers.

Tango & Cash are confronted by federal agents, one of them brandishing a S&W Model 15 (on the far left).

Cash brandishing his Ruger GP100 fitted with an Imatronic LS45 laser sight. This might be the first appearance of the LS45 laser sight in media considering that the earliest known examples date to 87'.

Cash testing the laser sight before investigating a lead.

Cash cocks the hammer of his Ruger GP100.

This revolver is used by the Chinese gunman (Philip Tan) when he assaults Cash (Kurt Russell) at his apartment.

A Beretta 92FS can be seen in the warehouse scene, when Tango & Cash are framed, being carried by one of the agents.

Tango & Cash are confronted by federal agents, one of them brandishing his Beretta 92FS.

The federal agent on the right holds his Beretta 92FS on Tango & Cash.

Tango carries the Detonics ScoreMaster as a backup weapon to his S&W (even if it would make more sense to do the opposite). 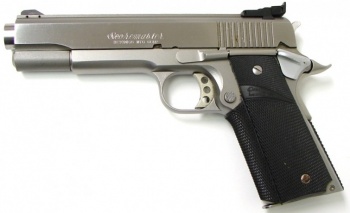 Tango holds the ScoreMaster when confronted by federal agents.

The Browning Hi-Power can be seen being used by Cash (Kurt Russell). An error can be noticed in the roof scene. Cash pulls the slide back to put a round in the chamber, but the slide stays opened. In the following scene, the pistol is pointed at Requin's leg, but now the slide is locked. In the next scene however, the slide is open again. 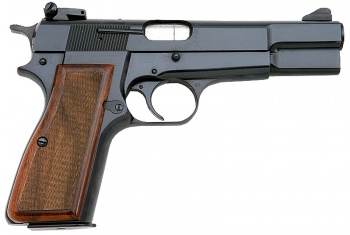 Cash taking the Browning Hi-Power. A Remington 870 can be seen in the back.

It is impossible not to notice that the slide is locked open.

A stainless steel Walther PPK/S is Cash's backup gun. When he takes his handgun from his drawer, he mentions the someone must be messing with his gun because the sights are off. In this Walter, the rear sight is dovetailed into the slide and adjustable, but the front sight is fixed. When it is later found at a crime scene, the gun is fitted with a sound suppressor.

Cash retrieving his Walther from his drawer

Cash notices that the sights are off on his Walther. While the front sight on the Walther is fixed, the rear sight is dovetailed into the slide and is adjustable.

This Taurus PT92-AFS is used by Perret (Jack Palance) to threaten Katherine (Teri Hatcher) in the final scenes.

Perret with the PT92. Interestingly, this shot shows how camera angles are often used to make it seem like weapons are being held to an actor's head when actually, due to safety reasons, they are not - on the right side of the picture Jack Palance appears to be holding the gun to Teri Hatcher's temple, but from the left you can see he's actually holding it in front of her.

Perret with the PT92

When Cash is threatened, Tango surprises Requin (Brion James) with a LAR Grizzly Win Mag. The two-tone pistol appears to be the same one seen in the film Turner & Hooch. 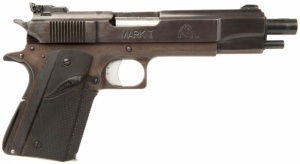 A heavily modified Heckler & Koch MP5A4 is seen used by both Tango & Cash at the end of the film. The weapon is housed in a custom shell, and is seen fitted with large scope, laser sight and with custom grips.

Heckler & Koch MP5A4 - 9x19mm. The A4 has an additional option on the selector for '3 round burst' thus possessing four fire options - Safe, Semi Auto, 3 round burst and full auto.

Tango & Cash with the modified MP5's.

The modified weapon on the table.

Cash holds the weapon with the laser sight activated.

A Heckler & Koch MP5A2 with two magazines clamped together can be briefly seen being carried by Tango (Sylvester Stallone) in the video that Perret (Jack Palance) is watching.

Tango is seen with the MP5A2 in Perret's video.

One of the guards firing an MP5A5.

Two guards with MP5A5s. It's difficult to see, but these weapons have 4-positions selectors, thus making them A5s.

Heckler & Koch MP5Ks are carried by both Quan (James Hong) and Lopez (Marc Alaimo) as they defend Perret's headquarters.

The Calico M950 pistol is used by Tango (Sylvester Stallone) in the final assault, and is used mainly from inside the vehicle.

Mini Uzis were used by both Tango (Sylvester Stallone) and Cash (Kurt Russell) in the final shootout.

A Mini Uzi is seen in the lower left corner.

A Micro Uzi can be briefly seen being carried by Requin (Brion James).

A Remington 870 folding stock is used by Cash to get the information from audio tech Skinner (Michael Jeter). The shotgun is also used by some of the prison guards when Tango & Cash escape.

Cash brandishing the 870 in the audio studio of Skinner. The shotgun has an extended magazine tube.

Cash pumps another round into his 870 to destroy some more of Skinner's equipment.

Cash grabs a Remington 870 from a gun rack.

One of the prison guards carries the 870

Remington 870 is fired by a prison guard.

The Ithaca 37 shotgun is seen in the hands of Sheriff's deputies at the beginning of the film.

The Ithaca 37 shotgun is seen in the hands of Sheriff's deputies at the beginning of the film.

At the film's beginning, an LAPD officer appears to hold the MGC replica of the Remington Model 31.

Behind Captain Schroeder (Geoffrey Lewis), an LAPD officer appears to hold the MGC replica of the Remington Model 31.

A sawed-off 12 Gauge Double Barreled Shotgun is used by the Chinese gunman.

The gunman firing the SBS

The M16A1 rifle can be seen both in the video about Det. Tango and used by some of Perret's guards, as well as in the warehouse. M16A1 rifles were also seen in the hands of the prison guards during Tango & Cash's escape attempt.

An M16A1 can be barely seen in the back, brandished by a guard

An M16A1 in the warehouse, along with other guns

When Cash grabs some weapons from the LAPD R&D lab, a Heckler & Koch HK91 is seen in a gun rack.

When Cash grabs some weapons from the LAPD R&D lab, a Heckler & Koch HK91 is seen in a gun rack.

When Cash grabs some weapons from the LAPD R&D lab, an FN FAL is seen in a gun rack.

When Cash grabs some weapons from the LAPD R&D lab, an FN FAL is seen in a gun rack.

The vehicle Tango & Cash "borrow" is fitted with a what appears to be a six-barreled Gatling-type weapon. Judging from the bore, the weapon's caliber appears to be 30mm. Though rotary barrel auto cannons appear all over the world in similar calibers (mostly mounted on gunships) this is a purely fantasy weapon.

Tango next to the fictional 30mm "Gatling" gun

During the quarry chase, what appears to be a real M134 minigun is used for when the side-mounted machine gun is actually fired.

During firing sequences, we can see the front end of a real M134 Minigun.

M60D machine guns are seen mounted on the hood of Perret's vehicles that chase Tango & Cash in the gravel pit at the end of the film.

A Danish Madsen machine gun without a magazine is seen when Perret enters his gun warehouse. 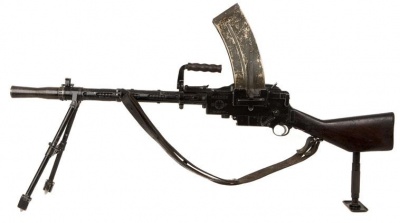 The assault vehicle driven by Cash also appears to have front-mounted machine guns.

The assault vehicle driven by Cash also appears to have front-mounted machine guns; the muzzle flare can be seen just above the right-hand headlights.

Cash is seen keeping a concealed firearm in the heel of his right boot. He uses this when confronting the Chinese gunman as well as later in the film.

Cash fires his shooting boot when a hitman tries to kill him at his home.

On the left, Cash fires his boot.

During an interrogation, an M67 hand grenade is seen taped to the mouth of Requin (Brion James). Another grenade is held by Cash during a fight with Requin.

During an interrogation, an M67 hand grenade is seen taped to the mouth of Requin (Brion James).

Another grenade is held by Cash during a fight with Requin (Brion James).

Several rifles and machine guns are seen on tables in the warehouse owned by Perret.