The Gilboa is a series of rifles from Israel, manufactured by Silver Shadow. It is yet another platform based on the M4 / M16 design. 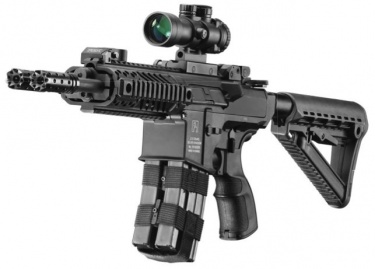 The Gilboa Snake is a unique double barreled assault rifle, first developed in 2013, that uses a captured internal spring system, so that the traditional AR buffer spring is not used and folding stocks can be installed. The theory behind the double barreled rifle is that one barrel fires its round a split second before the other barrel. This staggered firing of two rounds allows for the first round to shatter/penetrate barriers like glass or windshields before allowing the second round to fly straight through. In the original production version, one pull of the trigger fires two rounds each time it's actuated in semi auto mode. In full auto mode, both barrels fire within a fraction of a second of each other, each time a round or rounds are sent down range. The manufacturers had to modify the weapon to have two triggers for their export model (for the USA) in order to comply with ATF regulations.