Jarhead 2: Field of Fire is a 2014 Afghanistan War film that follows a squad of US Marines on a routine mission who find themselves assisting Navy SEALs in the rescue of an important Afghan woman and having to survive an onslaught of Taliban fighters. The film's cast includes Cole Hauser, Bokeem Woodbine, and Stephen Lang. The film is being marketed as a sequel to 2005's Jarhead, but is not related in any way to that film other than it was distributed by Universal Pictures and features US Marines in battle. Another DTV sequel, Jarhead 3: The Siege, was released in 2016.

The following weapons were used in the film Jarhead 2: Field of Fire:

Several of the carbines in the film that resemble the M4A1 appear to be hybrid weapons built in part from the "Gilboa" series of rifles manufactured by Silver Shadow, an authorized Israeli weapon manufacturer. The weapons are fitted with Israeli Meprolight MOR sights. These rifles and sights are not part of the arsenal of the US Marine Corps.

The "Commando" model fitted with a Meprolight MOR sight is the weapon of choice for most of the Marines in the film as the Navy SEALs.

Marines on guard with the Commando.

Senior Chief Fox (Cole Hauser) and other Marines with the carbine.

The carbine is held by Cpl Chris Merrimette (Josh Kelly).

The weapon carried by Private Soto (Jesse Garcia) appears to be a hybrid built from a lower Gilboa receiver and what resembles a Colt 653 upper. The weapon appear to be fitted with an Eyal day scope, a outdated optic popular in the IDF in the 1980s and 1990s.

The weapon is carried by Private Soto (Jesse Garcia) as he takes fire.

Some of the Marines carry a rifle with an even shorter barrel. These rifles appear to be the "Shorty" model and are not USMC-issued. The weapons are fitted with Meprolight MOR sights, also not USMC-issued.

Li with the weapon. This shorty weapon isn't USMC issue.

Cpl Danny Kettner (Bokeem Woodbine) carries what appears to be an M16A1 rifle fitted with an M203 Grenade Launcher.

The weapon also appears to be fitted with an Eyal 3x20 day optic.

Most of the Taliban militants appear to be armed with AK-47 rifles.

Taliban use their rifles during an ambush.

Taliban uses the rifle on the left.

The Taliban fires the rifle.

A Browning M1919A4 machine gun is seen mounted on a Marine humvee in the film. The .30 caliber machine gun (which is not currently in service with the USMC) is meant to be a substitute for the Browning M2, and as such is frequently referred to in the film as a "fifty".

Pvt. Soto mans the machine gun. This is a Browning M1919 instead of the USMC M2.

A PK machine gun is also used by Taliban.

Taliban firing the PK from a technical.

Taliban opens fire on the Marines with the PK. 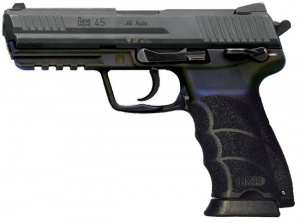 A fighter prepares to use the launcher.

Taliban also use what appears to be a RPG-22 rocket launcher during an ambush.

The launcher is seen mounted underneath.

Merrimette uses the rifle with the launcher mounted.