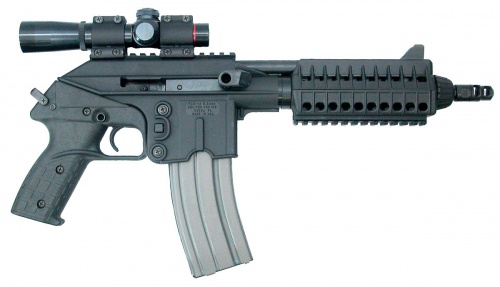 The PLR-16 (Pistol, Long Range) is a gas operated, semi-automatic carbine chambered in 5.56 mm NATO caliber; it is legally considered a pistol in the United States, despite the use of an intermediate cartridge. It was designed as and is intended as a long-range target and hunting pistol. The PLR-16 has a conventional gas piston operation and utilizes the proven M-16 breech locking system. The rear sight is adjustable for windage. The front sight is of M-16 type. An integrated MIL-STD-1913 Picatinny rail will accept a multitude of standard accessories. The muzzle end of the barrel is threaded 1/2” -28 to accept standard attachments such as a muzzle brake. Except for the barrel, bolt, sights, and mechanism, the PLR-16 is made entirely of high-impact glass fiber reinforced polymer. Similar to Olympic Arms OA-93 Pistol and Bushmaster Carbon 15.