Godzilla vs. the Sea Monster 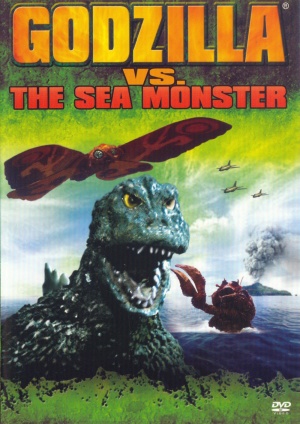 The following weapons were used in the film Godzilla vs. the Sea Monster:

This briefly-seen carbine (?) rifle is seen wielded by the bank robber Yoshimura (Akira Takarada) aboard the yacht. Ryota (Tooru Watanabe) renders it completely useless by dismantling it while Yoshimura is asleep.

Yoshimura holds the rifle on the intruders.

Agreeing to let them stay aboard, he hefts the rifle up.

Ryota reveals he took the rifle apart, showing Yoshimura the gun parts on a tray.

The Red Bamboo soldiers primarily use Japanese 'flash paper' non-guns based on the Thompson sub machine gun with large suppressor-like attachments on the ends of the barrel. They are an odd hybrid of Thompson features, with the unribbed barrel of an M1 but the top-mounted charging handle of an M1928A1. For years the Japanese cinema has used their own version of 'flash paper' non guns since they for the most part, are not allowed real firearms, even their movie industry. Japanese flashpaper guns are identifiable due to the distinctive "pinkish" or "Reddish" color of the flash and the lack of ejecting brass and excessive smoke from the muzzle.

Ryuui and his men catch the castaways inside the Red Bamboo base. The soldier on the left has an Thompson.

Rushing up some rocks in pursuit of the slave girl Dayo.

A decent view of one soldier's (left) Thompson as Ryuui reacts to the sudden intrusion of Godzilla.

Browning M1919A4s are seen used as sentry guns by the Red Bamboo.

A secondary firearm employed by the Red Bamboo is what appears to be the MP40.

Behind the soldier with the M1A1 Thompson.

A few of the weapons seen in the hands of the Red Bamboo are obvious props either inspired by existing guns, or entirely fictional.

Captain Ryuui (Akihiko Hirata) (named "Captain Yamoto" in the English dub) carries a chromed handgun as his primary sidearm. It appears to be a toy or otherwise non-functional weapon.

Ryuui gestures with his gun for his men to return to the ship.

The gun is visible in Ryuui's holster as the Red Bamboo run after Dayo.

Ryuui points his gun at some slaves after firing a few attention-getting shots.

At least one Red Bamboo soldier is seen with a silver-colored SMG that resembles a chromed MP40.

Held by the soldier third from left. 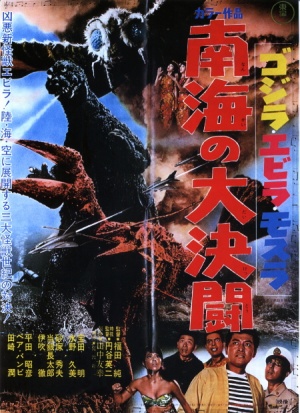 Godzilla vs. the Sea Monster (1966)
Retrieved from "https://www.imfdb.org/index.php?title=Godzilla_vs._the_Sea_Monster&oldid=830202"
Categories: