The Gatling Gun was one of the precursors to the modern machine gun, and the first support weapon to possess a mechanical cycle of function; while previous rapid-fire guns had required multiple barrels to fire multiple shots, Dr. Richard Jordan Gatling's gun instead used a mechanism resembling a rack of bolt-action rifles with their bolts interfacing with cams to operate them as the barrel group was rotated by a hand crank, using a single common feed source. The gun was initially used with paper cartridges in metal chamber sleeves (effectively making the gun an incredibly bizarre revolver), but switched to brass metallic cartridges with their invention.

Many models of Gatling were produced in various calibres, usually with six barrels but some with up to ten.

In the strictest sense Gatling's invention was not a machine gun since it was still completely manually operated, with the Maxim being the first true machine gun; it is often categorised as one because the effect of the weapon was the same. In the United States, the BATFE has ruled likewise that a crank-operated Gatling Gun is not legally considered a machine gun, since it requires continuous manual actions by the operator in order to fire.

Gatling also experimented with rigging one of his guns to an early electric motor, experiments that would be revitalised during the 1950s with the development of the M61 Vulcan aircraft cannon.

When Gatling guns were ordered by Tsarist Russia their production was overseen by General Aleksandr Gorloff, the military attaché to the Russian embassy in Washington DC. Gorloff slyly had his own name stamped on the weapons in Cyrillic before they were shipped, leading to some confusion in Russia with nationalists crediting Gorloff as the inventor and referring to the weapons as "Gorloff Guns."

Note: This page is reserved for the 19th century models of Gatling Guns build by manufacturers such as Colt. Modern electric driven Gatling-type weapons don't belong here nor should they be linked here. 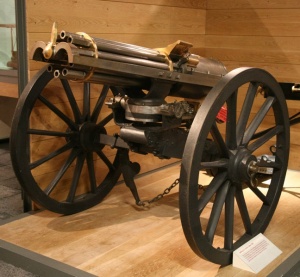 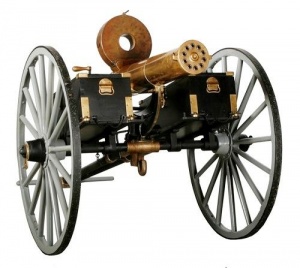 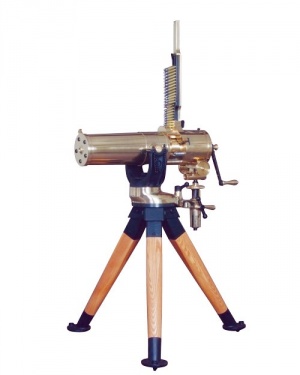 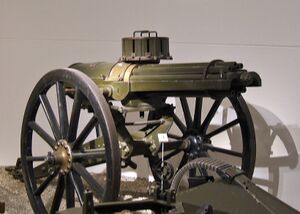 Capacity: Various gravity feeds: manually loaded hopper (M1865), gravity "magazine" with unsprung follower (M1871), Bruce feed guide (M1881), Broadwell Drum (a cylindrical feeding device which was manually rotated to bring stacks of cartridges into position, either a seldom-used 400-round version with 20 20-round stacks or the more common 240-rounder with 20 stacks of 15), 104-round Accles Drum (a feeding system resembling a sideways pan magazine in that it was indexed by the gun's mechanism rather than a spring follower)

Gatling Guns of multiple manufacturers have been used in the following films: