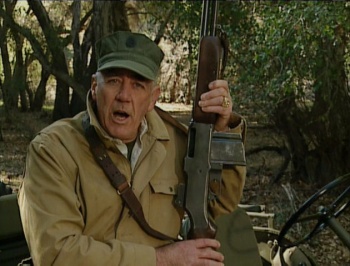 Ronald "R." Lee Ermey (1944-2018) was an American actor/television host who was perhaps best known for his portrayal of Gunnery Sgt. Hartman in the 1987 Stanley Kubrick Vietnam War film Full Metal Jacket, a role for which he received a Golden Globe nomination for Best Supporting Actor. Prior to his acting career, Ermey had served in the US Marine Corps from 1961 to 1972, including 14 months in Vietnam. While he retired as a Staff Sergeant, Ermey was honorarily promoted to Gunnery Sergeant in 2002. Prior to Full Metal Jacket, Ermey had already had speaking roles in several Vietnam War films including Apocalypse Now, Purple Hearts, and The Boys in Company C. While he made a career out of playing military characters (as in The Siege of Firebase Gloria and The Frighteners) throughout the ensuing decades, Ermey also appeared in such films as Mississippi Burning, Seven, The Texas Chainsaw Massacre (2003), and The Watch in addition to lending his voice to such productions as the Toy Story trilogy and two episodes of The Simpsons. His popularity would also lead him to host two popular History Channel series: Mail Call and Lock 'n Load With R. Lee Ermey. On April 15th, 2018, Ermey passed away at the age of 74 due to complications from pneumonia.