From Internet Movie Firearms Database - Guns in Movies, TV and Video Games
(Redirected from The War Wagon)
Jump to navigation Jump to search 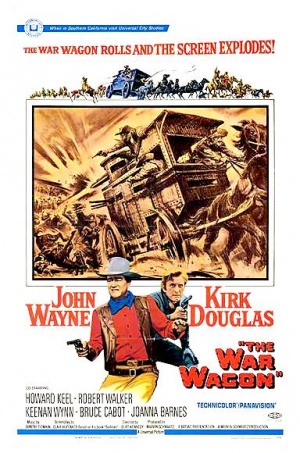 The War Wagon is a 1967 Western directed by Burt Kennedy (Return of the Magnificent Seven) and stars John Wayne as Taw Jackson, a rancher who was shot and wrongly sent to prison and now seeks retribution against the corrupt businessman who stole his land and claimed the gold found on it. Taw decides to team with Lomax (Kirk Douglas), a gunslinger, on a mission to hijack a shipment of the gold that the businessman is transporting in a heavily armored stagecoach known as the "War Wagon".

The following weapons were used in the film The War Wagon:

The Winchester Model 1892 is used by several characters.

Pierce's men inside the "War Wagon" fire their Winchester rifles.

A Colt Gatling Gun is the main armament of the "War Wagon". It's seen mounted on a turret on the top rear of the stagecoach and is fired by Frank Pierce (Bruce Cabot).

The Gatling Gun is seen in the turret of the "War Wagon". Note that there doesn't seem to be enough headroom at the top to actually load the gun's upright magazine.

The Gatling is fired.

Pierce (Bruce Cabot) opens up with the Gatling Gun.

The Gatling is used. Note the lack of a visible magazine.

When Taw first meets Lomax, a display of guns is seen in his private room.

When Taw meets Pierce, a cabinet of rifles is seen.